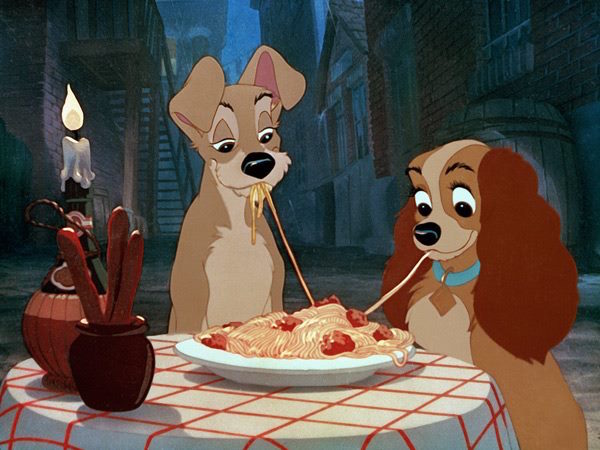 There are five purebred dogs in the animated Disney classic, Lady and the Tramp. Can you name them? Answer at the very bottom. Until then, a few things you might not know about this favorite:

“Lady” was based on a real dog. In 1937, a writer for Walt Disney, Joe Grant, showed his boss a few sketches he’d done of his Springer Spaniel, “Lady.” Disney liked it enough to encourage Joe to do a full storyboard. What Disney didn’t like was the basis of Grant’s plot: A dog learning to cope with her owners’ new baby. Sadly for Joe, the project was scrapped, but a few years later, Disney came across a story titled, “Happy Dan, the Whistling Dog.” He felt that if the two story lines were combined, it could work, and asked “Happy Dan,” author, Ward Greene, to come up with one. Voila: Lady and the Tramp.

One of the scenes from “Lady and the Tramp” was rooted in Walt’ own life. One Christmas, Disney gave his wife a hat box with, presumably, a hat inside. Initially disappointed, (Lillian Disney preferred to buy her own hats), she opened the box and out popped a Chow Chow puppy. Lillian was ecstatic, and they named the puppy, “Sunnee.”

The storyline for one of our favorite characters, “Trusty,” wasn’t supposed to end well. Though viewers see him enjoying Christmas Day with his friends, he was originally caught by the dogcatcher, perhaps never to be seen again. Two stories emerge as to why Trusty got a reprieve: One is that Disney had gotten so much criticism for killing Bambi’s mother that he wasn’t anxious to repeat the experience. The other version has singer, Peggy Lee (the voice for the cats, “Si” and “Am,” Peg, the dog, and “Darling,” the human) crying in the studio one day. When Disney he asked her why she was weeping, she said that the scene with “Trusty” was just too sad, and pleaded with Disney to let Trusty live. Though Disney argued that the movie needed the drama,  Lee prevailed.

Were you able to name five purebred dogs in “Lady and the Tramp?” Here’s they are:

One thought on “Lady, the Tramp, and Their Purebred Friends”