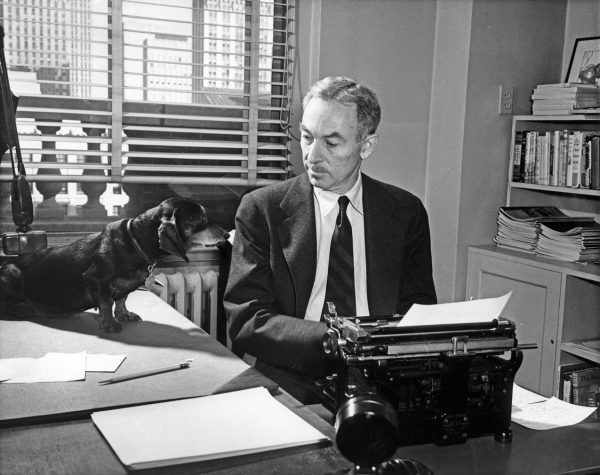 He wrote one of the most endearing children’s stories ever, Charlotte’s Web,  and if you were a writer, editor, or secretary “back in the day,” your your go-to bible, The Elements of Style (commonly known as “Strunk & White”) was written by him. He was a contributor to The New Yorker magazine at a time when it was the most important literary magazine in America, but for our purposes, it was his collection of quotes and essays on dog ownership that make him beloved.  He was born Elwyn Brooks White, the youngest of six kids, but we know him as E.B.White.

A few years ago, his granddaughter, Martha, published a compilation of her grandfather’s best and funniest poems, letters, sketches and stories describing the various dogs White had over his life. “E.B.White on Dogs” is a wonderful gift for yourself, or another dog lover. Here are a few “pearls:”

“I like to read books on dog training. Being the owner of dachshunds, to me a book on dog discipline becomes a volume of inspired humor. Every sentence is a riot.”

“My Christmas will be a whole lot wetter and merrier/If somebody sends me a six-weeks-old Boston terrier.”

“It sometimes takes days, even weeks, before a dog’s nerves tire. In the case of terriers it can run into months.”

Photo of E.B.White with his Dachshund