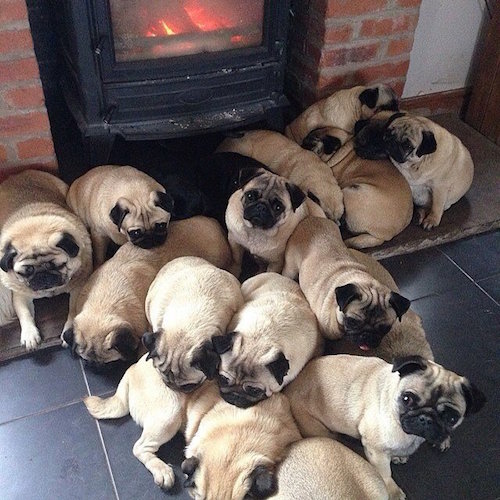 We confess a weakness for collective nouns if for no other reason than the intrigue of why a grouping of anything comes to be so named. A group of crows, for instance, is a “murder,” while a group of elk is a “gang.” If you see a bunch of jellyfish hanging out, you can tell your friends you saw a “smack” of jellyfish, while (fittingly), a number of rhinoceroses together is a “crash.  Who comes up with these?

Frustratingly, we’ve not been able to find a reliable source for why the collective noun for Pugs is a “grumbling,” but site after site indicates that it is so. The only plausible explanation we’ve found is that Pugs are known for their snorting, nasal vocalizations and involuntary sounds, thus making “grumbling” an apt collective noun for this breed.

We’re not sure if this site is pulling our leg (probably), or is legit, but according to arf4dogs.tripod.com, the Kennel Club approved the listed collective nouns for various breeds of dog. Find your breed and tell us if you agree. Sadly, our own breed (the Puli) isn’t listed, probably one of many – but that just means there’s a vacancy for the word. What should the collective noun be for your breed?