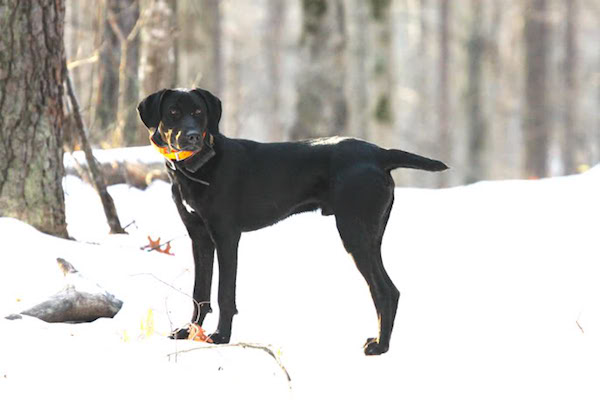 They are called “little blacks” even though other colors occur in the breed (and are disqualifications), and after a century of breeding pure, the Stephens’ Stock Cur was recognized by United Kennel Club in 1998.

Stephen’s Stock were originally a strain of Mountain Cur bred by Hugh Stephens and his family in southeastern Kentucky, but before that, they were likely descendants of dogs brought with European settlers who needed a dog who could put meat on the table, and help protect family and stock.  Today, Little Blacks are among the five “recognized” lines of mountain curs from the southern part of the United States, dogs that Stephen had specifically bred to be all black, and superb at hunting squirrels and raccoon.  As an aside, the Treeing Tennessee Brindle and the Mountain View Cur were developed from the strain produced by Hugh Stephens

The dogs are one of the most trainable Curs, and are celebrated for being courageous and unrelenting hunters. As such, the breed isn’t typically recommended for non-hunting owners who are otherwise attracted to their smaller size (they weigh between 44 to 55 pound) and easy coat care. This dog can – and wants to – hunt.  They are vocal virtuosos who hunt hard and fast, their head held high on track.  Silent trailing is acceptable, but open or semi-open on track is preferred, as is a good changeover at the tree, and regardless of the game, they have strong treeing instincts.