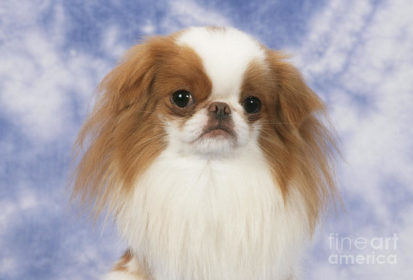 In the 21st century, eye contact is no longer considered offensive in Japan,  just as long as one knows how – and when – to properly break the eye contact (otherwise one would be regarded as downright creepy). The timing is just something one has to learn in context in the culture.

This was not always the case. In the class system of feudal times, it was an offense to look directly at someone who was above one’s class. Getting it wrong often ended very badly for the person of lower station. This is, perhaps, why the Japanese Chin was bred to have an “oriental expression,” a term that refers to dark, big, shiny eyes with a small amount of white showing in the inner corners. While it suggests a look of astonishment, more importantly to the sensibilities of the culture that developed the breed was making sure that the eyes of the breed looked slightly outward, as opposed to straight ahead. It avoided the appearance of a direct gaze, something the Japanese considered offensive and bothersome to both humans and animals.

Owners have said that it’s all too easy to get lost in a Chin’s eyes, and this seemingly magical ability to chase aways the blues and restore a spiritual balance was much appreciated in ancient Japan. Some say this is why the Japanese Chin may be the only breed of dog that has this kind of gaze, almost like that of a psychiatrist who listens without appearing to listen.

One thought on “Looking, without Looking”