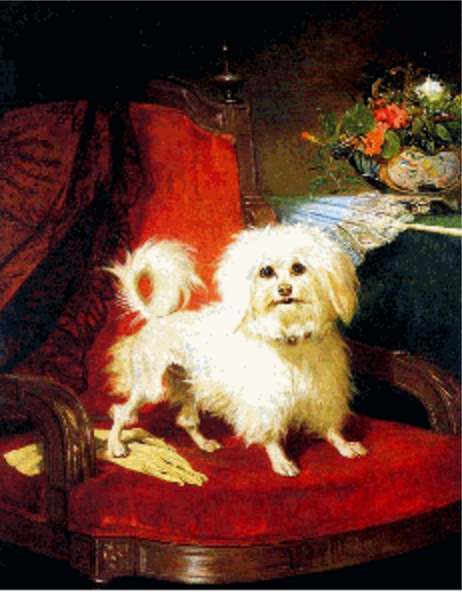 We love a good breed legend, and one associated with the Löwchen is that if a knight died in battle, a lion was carved at the foot of his tomb, but if he died at home in bed, the lion was replaced with a Löwchen.

And then there’s the story of Bijou, n 18th century parti-colored Löwchen who lived in Weilburg, Germany in a castle on the Lahn River.  We know that Bijou was utterly devoted to his master, and when his owner left for a hunting trip, Bijou jumped from a window 60 feet above the river rather than be left behind.  The legend part comes with the ending of the story.  One version holds that Bijou survived the jump and was rewarded by riding to the hunt on his master’s saddle, the other version doesn’t end as well. Bijou’s landing, however it ended, ensured his fame, and his life size portrait painted in 1787 still hangs in the baroness’s bedroom in Weilburg Castle. Breed enthusiasts are quick to point out Bijou’s devotion, loyalty and fearlessness are very much evident in their dogs today.