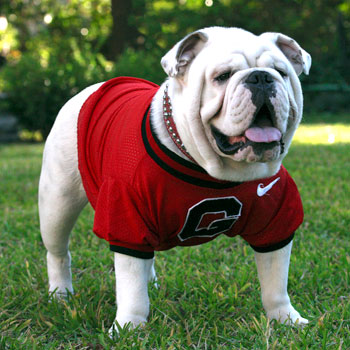 It’s a rallying cry for more teams than we can count, but oh heck, let’s try.

Over 40 university sports teams are named after the breed, and that doesn’t include the smaller colleges, high schools and middle schools. In Canada, the Bulldog is the mascot for over nine hockey teams, while in Australia, five football teams are “bulldogs.”  In South Africa, the rugby union team is the Border Bulldogs,  in Denmark, the ice hockey team is the Odense Bulldogs, Oddset Ligaen, and the rugby team, CS Dinamo București in Romania are Bulldogs. The British Bulldogs is a WWF wrestling team accompanied to the ring by Matilda and later Winston, an English Bulldog, and the businesses, Bulldog Films, Churchill Insurance, Mack Trucks, Victory Records and Crux Creative all have a Bulldog as their mascot.  How about the military? The United States Air Force Academy, United States Air Force, 354th Fighter Squadron, United States Army, 3rd Infantry Division and the United States Marine Corps all have Bulldog mascots. And we’ve just scratched the surface. Go Bulldogs, indeed.

Image of “Uga,” the iconic University of Georgia mascot