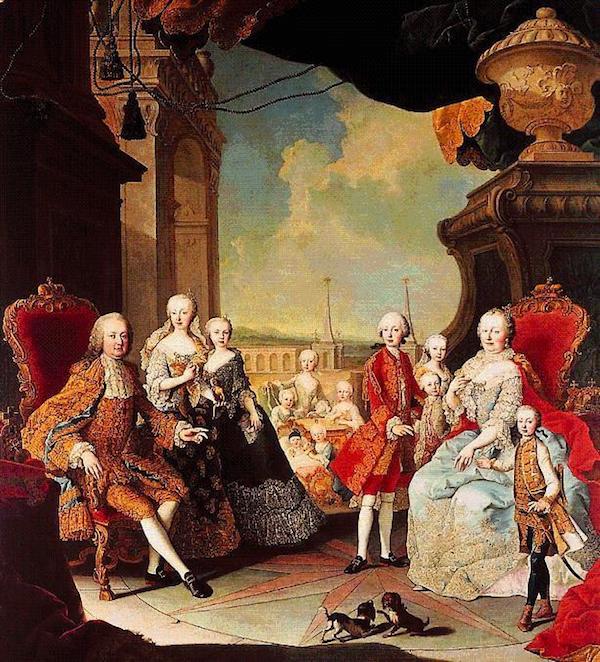 If ever anyone needed a Twitter account to reach the masses, it was Marie Antoinette. For over two hundred years, she’s been famous for losing her head, of course, but also for being oblivious to the conditions of the people. As proof of her callous decadence, she’s been credited as saying, “Qu’ils mangent de la brioche**,” or “let them eat cake” when told that people were starving.

The problem is that she never said the words.  Historians believe the phrase was falsely attributed to her by revolutionary propaganda keen to portray her as ignorant, aloof, and insensitive. In fact, the expression pre-dated Antoinette and was referenced as the words “of a great princess” in Jean-Jacques Rousseau’s 1766 treatise, Confessions, written when Antoinette was only 11 years old. Furthermore, the quote was linked to Antoinette a full 50 years after her execution in 1793. 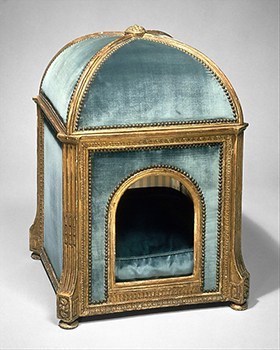 Marie Antoinette shows up here because of her lifelong affection for dogs. Toy spaniels (what some believe were Papillons) were the preferred dogs of Marie-Antoinette’s family in Vienna, the Habsburgs, but when she came to France as a teenager, she had to leave behind, “Mops” her Pug; Expectations were that she leave behind her old Austrian life, and accept her new role as the future wife of the French King, but happily, once the new Princess settled into Versailles, Marie and Mops were reunited.

Despite an unconsummated marriage for seven years, Marie-Antoinette was said to have taken a lover, the Swedish ambassador Count Fersen, a regular visitor at Versailles. Historians have never been able to confirm or deny the rumors (though one site says that letters decoded a few years ago suggest a torrid affair, and that two of Marie’s children with Louis XVI were actually Fresen’s), but some sources indicate that Fersen gifted a Leonberger named “Odin” to Marie. A different source says that it was Marie Antoinette, herself, who returned home with some Leonbergers after a trip to Austria. They cite Mademoiselle de Gineste, of Courivause, Marne, France, whose ancestor, the Marquis de Pluival, was a page at the court of Marie Antoinette. Seeing his fondness for the dogs, queen gave him a few Leos which he took home. The Gineste family, it’s said, can trace some of their dogs back to the Marquis’s first dogs.

There seems to be different names attributed to a dog Marie had towards the end of her short life, a red and white toy spaniel thought to be a Papillon. Some sources say the dog’s name was Coco, others say it was “Mignon,” a gift from her dearest friend, the Princesse de Lamballe. Originally named, Thisbée, the dog was left behind at the Tuileries after the chaos of the invasion of the Parisian palace during the revolution. Later, the dog was reunited with Marie and her children, and stayed with Marie until her children were taken. Mignon/Coco and Marie were separated only when Marie was moved to the Conciergerie. Legend has it that when the Queen’s head from the guillotine, dead silence was broken only by the loud, agonizing howl of a dog. “In an instant, a soldier’s bayonet pierced its heart. ‘So perish all that mourn an aristocrat,’ the man cried.

That account is at odds with a version that indicates the Papillon lived out his life with the governess of Marie’s children. The dog was kept safe during the entirety of the French Revolution, and was still alive at the age of 22 when Napoleon was defeated. Mignon/Coco actually returned to Paris following the restoration of the Bourbon monarchy, and died shortly afterwards. Indeed, his gravestone can still be seen in the gardens of the Hôtel de Seignelay.

Image: Painting by Martin van Meytens, official portrait artist for the Habsburg-Lorraine dynasty,  of Marie Antoinette’s family including her mother, Marie-Thérèse of Austria and her husband, François de Lorraine, and their 13 children (and dogs)