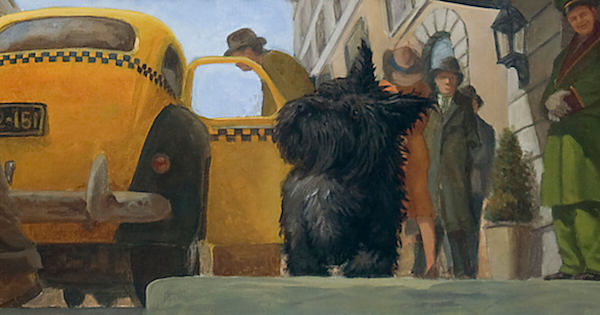 He was a Christmas present in the winter of 1940, but the name he came with, “Big Boy” didn’t suit the dignified Scotsman, and so he was renamed for an ancestor, a Scottish chieftain who defied and bested King James IV.

He wasn’t an actual “replacement” per se, for his predecessors, a retired police dog who love-nipped no fewer than four dignitaries, and Meggie, the dog who “met” Associate Press reporter with her incisors. Those dogs found more appropriate settings for their propensities, but they left behind an owner who still longed for a dog.

He was a Connecticut Yankee, born in Westport to parents owned by his new master’s 6th cousin, Margaret “Daisy” Suckley; Though he started out wee, he would grow up to sit between Winston Churchill and Joseph Stalin, be the subject of two books and a movie, and receive so much fan mail that a secretary was hired to handle it all. His name was the secret password for American soldiers as a safeguard against German infiltration, and he became the only dog to receive the honor of being included in a presidential memorial.

His name was Murray the Outlaw of Falahill, and the Scottie’s famous master was President Franklin Roosevelt from 1940 until the moment FDR died in office in April of 1945.  We, of course, know him better as “Fala.”

Enjoy light-hearted clip about Fala below from 1943:

Next month on October 13th, 2018, the Scottish Terrier Club of Greater Atlanta will celebrate “Fala Day,” 2018 at Franklin D. Roosevelt’s Little White House in Warm Springs, Georgia. It should be a great event for Scottie owners in the area. Get more details here.

Image is from the cover of the book, First Dog Fala written by Elizabeth Van Steenwyk and illustrated by Michael G Montgomery, winner of the 2008 National Book Festival selection for the state of Georgia, and a 2009 IRA Teachers’ Choices List selection. The artwork may be purchased here.