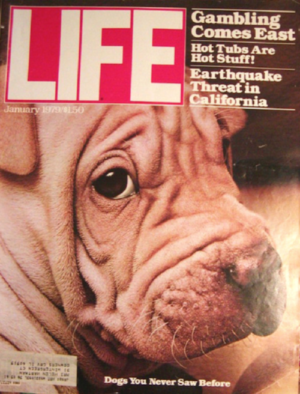 The Chinese Shar-Pei is no stranger to magazines.  In the late 60s and late 70s, “The Guinness Book of World Records” named it the rarest dog breed, and in 1973, Dogs Magazine published the now famous plea of Hong Kong breeder, Matgo Law, to save the Shar-Pei (or Chinese Fighting Dog, as it was called at the time) from extinction. In 1979, Life Magazine featured a Shar-Pei on its cover along with Matgo Law’s earlier appeal. After the issue was published, sales of Shar-Pei puppies skyrocketed in the United States.

One thought on “The Shar-Pei Cover Dog”