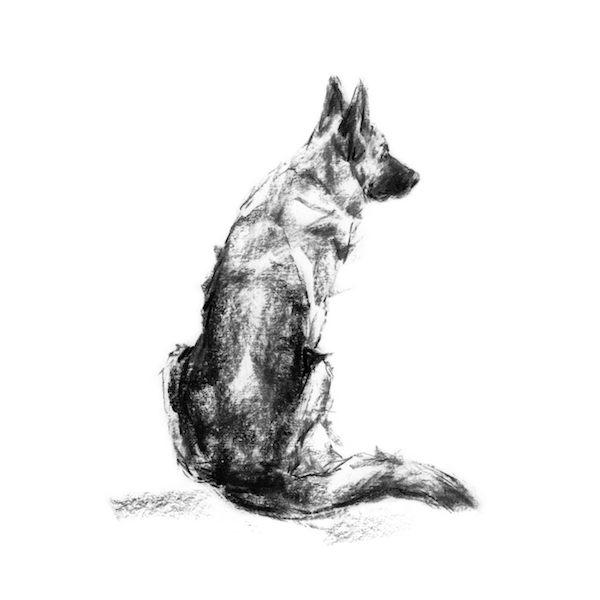 Max went to a dog show and saw exactly the dog he had in mind.

However, what Max had in mind wasn’t that dog, but the qualities of the dog to “build a better dog.”  More specifically, Max wanted a distinct working dog type, and the dog that Max had seen at the show had the wolf-like appearance he envisioned for his new breed.

Max bought the dog for (at the time), a staggering $200 Deutchmarks.

The dog’s name was Hektor Linksrhein (which Max changed to Horand von Grafrath), and he became the first dog registered in Max’s Society for the German Shepherd Dog, or the Verein für deutsche Schäferhunde, commonly abbreviated to “SV.”  The year was 1899. After this point in time, all other herding dogs in Germany would be referred to as Altdeutsche Schäferhunde, or Old German Shepherd Dogs.

Later, Max would buy Horand’s brother, Luchs, and breed them each to suitable females thereby establishing his breeding program.  Over time, Horand, himself, was bred to 35 different bitches, and produced 53 litters.  One hundred forty of his puppies were registered with the SV, though we should mention as an aside, that the Society was not the first organization that had attempted to standardize a German working breed.

In 1891, the Phylax Society was formed by a group of dog enthusiasts who also shared Max’s vision for a standardized German working breed. It had as a member our very own Max.  However, squabbles and disagreements among the members (in dog people, imagine that!) about what traits were most important in their as yet imagined breed resulted in the group’s demise just four years after it had been formed.

Max’s vision never faded, and soon, he would discover Horand.

By now, German Shepherd Dog enthusiasts know that “Max” was German cavalry officer, First Lieutenant Max Emil Friedrich von Stephanitz, creator of the versatile, beautiful German Shepherd.  His Verein für deutsche Schäferhunde still thrives, 120 years after its creation. Only commercial dog traders are excluded, and with more than 50,000 members, the SV is the biggest breed kennel club of the world. It held the first annual Sieger dog show the same year as its inception, and today, that same dog show is the largest German Shepherd Dog conformation specialty show in the world with the titles of Sieger and Siegerin still awarded to recognize the male and female Grand Champion.

The VS reports having about 10,000 stud book entries each year, or in total, over 2 million stud book entries. It reports that currently, approximately 250,000 German Shepherds live in Germany alone.

Max’s breed motto was “utility and intelligence,” and we daresay that his vision was wildly successful.