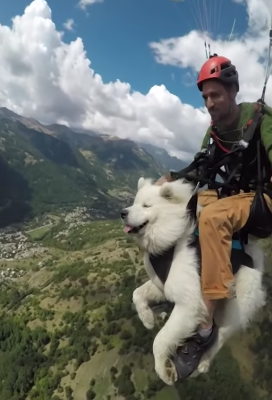 You’ve just seen Adrien Nisan and his Samoyed, “Ouka,” paraglide over the Col du Granon, a famous mountain pass in France.  Ouka has his harness well attached around his body, and every so often, Adrien gives him a pat to check up on him.”

We’re not going to ask if you think this is a bad idea. We’re going to ask you if this dog looks stressed out to you. A reminder: Canine calming signals are behaviors that dogs do to reduce tension and pacify anxiety. Given where the dog is (in the air), such signals would include yawning, lip licking or chewing, looking away, trying to scratch at himself, urinating on himself, and flattening his ears close to his head. Did you see Ouka do any of those things?

Adrien Nisan, 39, a filmmaker and paraglider, had been living in his van full time for three years to pursue traveling,

Ouka, a three-year-old male Samoyed, had been abandoned twice by previous owners.

After a stretch of loneliness, Adrian decided to adopt Ouka. They lived in the mountains so Adrien would know that Ouka managed altitude, then went on to ascertain that he wasn’t afraid of heights (and next, a fear of flying). If you ask us, they’re a good fit.

In Vecorin, a village in the Swiss Alps, ten percent of residents hang-glide, many of them to work. Taking a dog along isn’t all that odd, and as you can see below, “Maya” is one of them, and has a safe landing:

And then there was Dan McManus and “Shadow,” an Australian Cattle Dog and his psychiatric service dog. “He wanted to go along, and he didn’t really like to see me up there by myself,” McManus said in an interview, “He needs to keep me safe, so he needed to go flying with me to keep me safe.” So Dan created a special harness for Shadow, and they started to hang glide together in the skies of Salt Lake City, Utah.

We use dogs to go after bad guys, work in war conditions, sniff for bombs, and allay the stress of traumatized people. Having the wind in your face as you hang glide with your owner inches away doesn’t seem to be that bad of a deal to us.

Still Image from the video of Ouka and Adrian