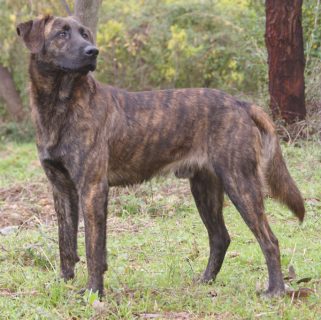 The land that spawned Napoleon Bonaparte also gave us one of the most attractive brindle breeds out there (albeit a little known one)  – the Cursinu (which translates to “Corsican dog”). Known on the Island of Corsica since the 16th century, the rustic and robust Cursinu accompanied flocks of sheep, guarded their sheepfold, stood watch over his master’s house, then hunted with him.

In part, a lessening dependence on the pastoral world led to the breed nearly vanishing, and it might have had it not been for the Cursinu Safeguarding Association formed after the publication of Paul Franceschi’s study of the genetic characteristics of the breed.  Concerned fans of the breed undertook action to safeguard this Corsican native.

It helped. There are now presently some 2,000 Cursinus in Corsica, and the breed is growing in popularity (and numbers) in France, possibly because the Société Centrale Canine (French Kennel Club) has recognized the breed since 2003. Check out the breed being exhibited in the show ring at a Paris Dog Show in 2015:

13 thoughts on “Meet the Symbol of Corsica ”