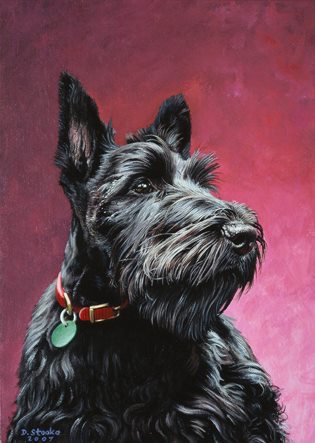 Like most of the Highland Terriers, the Scottie (originally called the Aberdeen Terrier) was originally bred to assist small game hunters and farmers in Scotland to flush game, especially badgers. From its size to its tenacity, virtually everything about the breed was geared towards one singular idea: Hunting. As Bishop John Lesley wrote in his book,  History of Scotland from 1436 to 1561 (and the first known mention of the breed), “They are a “dog of low height, which creeping into subterraneous burrows, routs out foxes, badgers, martins, and wild cats from their lurking places and dens.”
Most of those traits survive to this day.  Scotties have a good tracking sense, and keen eyesight shaded by those famous eyebrows. This ability to detect even distant movement that no one else sees (read: their owners) gives cause to take chase almost immediately.
Scottish Terriers have been described as difficult to train, but we feel this is unfair. This was a breed developed to work independently of its owner, and without needing instructions. As one Scottie owner once told us, a Scottie isn’t going to stop to read the instructions on how to build a tricycle. The Scottie is just going to build the dang tricycle. This isn’t un-trainability or disobedience, it’s a temperament suited to work on its own because that’s how it was “built.”
Image: Scottish Terrier by David Stooke
Find and support his work here: http://www.davidstooke.co.uk/portraiture-dogs.html

40 thoughts on “The “Untrainable” Scottie”