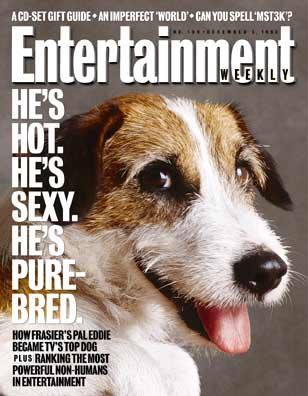 He was born on Christmas Eve, and was utterly incorrigible. “He’s wild,” said one of his breeders. He would climb trees up to six feet, and reveled in rolling around in cow manure, especially after a bath. He was often found on top of a table noshing on something delectable, and when he wasn’t rambunctious, he was mischievously ripping into something. And, he was an escape artist. Because he was the biggest puppy in the litter, he’d been named “Moose,” and because of his insatiable energy and curiosity, his owner thought the busy Jack Russell Terrier might be well suite for show business. Cathy Morrison, a Universal Studios animal trainer, agreed, and worked with Moose for 18 months when fate came calling in the form of an audition for the television show, “Frasier.”

“Moose,” was renamed “Eddie” for the show, was soon pulling in $10,000 for each episode of Frazier. He got more fan mail than any of the human cast members. Moose was also the first canine actor to be so widely published on magazine covers and have his own photo shoots. Much of his persona was due to Mathilde De Cagney, the trainer who took over when Moose won his part.

Moose was with the show for ten years. His son, “Enzo,” almost the spitting image of his father, took over towards the end of the show’s run. As for Moose, he passed on in 2006 at the ripe old age of sixteen. He was his breed, and his breed was the perfect fit for the people who knew how to work with it.