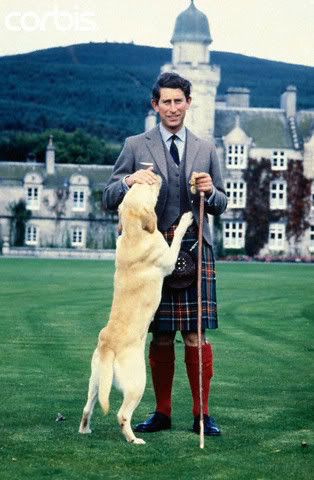 As famous as Her Majesty is for her love of the Royal Corgis (she’s had more than 30 during her reign), less known is her private love of the Labrador Retriever (starting with two dogs she had back in 1964 named, “Snare,” and “Sabre”). In a book by Ben Fogle, it’s written that the Queen even ordered special adaptations to the Royal fleet of Land Rovers to deal with the dogs’ steamy foggy breath: Windscreen wipers on the inside.

Some 20 working Labradors have been kept at the royal kennels at Sandringham, dogs with whom The Queen has had hands-on relationships. In her younger days, she would signal her black Labrador, “Sherry,” from a distance of 800 yards, using only hand signals and whistles. Not just “pretty faces,” the dogs have won gun dog championships, and the black and yellow dogs have been sought after the world over.

The Royal children, it should be said, have gone on to own other breeds, a topic for another day, but we can say that Prince Charles never was a Corgi man, and had a marked preference for the Labs.

As a wildly off-topic aside, did you know that Queen Elizabeth has been one of the world’s most successful owners and breeders or racing pigeons? Over the years, the royal pigeons have won every major race in the north and south of the UK. The Queen maintained an interest in the Royal pigeon lofts which at one time (if not still) contained 160 mature birds and 80 youngster which she regularly visited when in Sandringham. The Queen is also patron of a number of pigeon racing societies in recognition of her interest in the sport, most notably the Royal Pigeon Racing Association and the National Flying Club.  Last year, Animal welfare officers who rescued a lost pigeon in East Lothian were surprised to discover that it belonged to the Queen. The racing pigeon had lost its way – some 407 miles away from the Sandringham estate – and became too tired to take off again. The pigeon was returned home.

Getting back to dogs, read this for more on the Queen’s Labrador Retrievers.