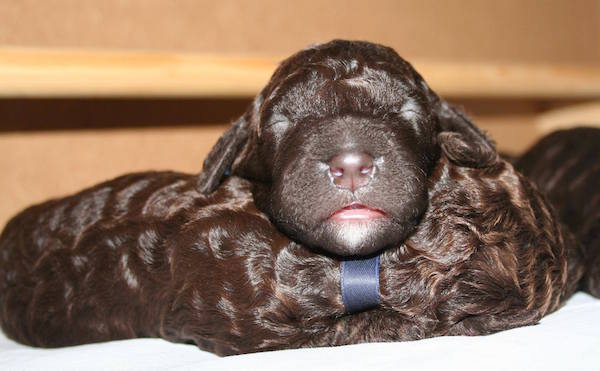 The breed we’ll discuss below starts out looking like this. Couldn’t you just die from the cuteness?

The “father of this breed” is thought to be Justin McCarthy of Dublin who refined the breed from two distinct types in terms of color and size (the “South Country Water Spaniel” and the “North Country Water Spaniel”) into one distinct and repeatable type. McCarthy introduced the unified breed to Ireland in the 1830s, but despite that, no written records were left behind about the dogs that came before,  leaving us to speculate about the breeds that went into this water baby. Water being breed’s “calling card” for its dare to swim in frigid water, and cold, rough weather.

By now, perhaps you’ve keyed in on the word, “water,” and if so, you would be correct if you identified this baby as an Irish Water Spaniel, our photo courtesy of Dagmar Lukas. The following legend comes to us from “The Irrepressible Irish Water Spaniel” By Geraldine Hayes as it appeared in the archives of the AKC Gazette:

“One of the most colorful tales harks back to the early days of Saint Patrick’s missionary work, when the then-little-known holy man was ridding the island of snakes. The good father, dressed shabbily, was given lodging for the night by a fisherman whose liver-colored dog was particularly adept at catching fish. Because the dog had grown out of his puppy coat, however, his tail was too profusely covered with hair and was hampering him in his specialty.

“Saint Patrick said nothing and was well on his way before the fisherman arose the following morning. Going out into the yard that day, the fisherman was surprised to notice that a great change had come over his dog. His tail was no longer bushy, but was covered only with short curls at the base and with short, smooth hair for most of its length – the “rat tail” that is now so characteristic of the breed. Also, for the first time, the dog’s head was covered with a luxurious topknot (a 5th-century example of recycling!).

“And so a legend began for the Irish Water Spaniel, whose topknot, rat tail, smooth face and coat of crisp, liver-colored curls, make it a truly unique breed. Indeed, throughout its history, few breeds have shown less divergence from type. Add to these characteristics a double coat allowing it to work in even the most frigid conditions, as good a nose as any of the retrievers, the ability to swim with power and work tirelessly, and a whimsical, lovable nature, and you have a typical Irish Water Spaniel.”