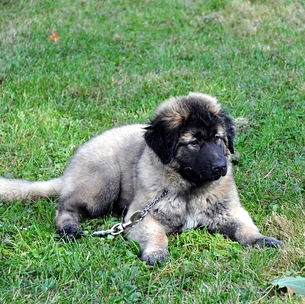 The adorable puppy at the left is the Estrela Mountain Dog, the gorgeous adult version seen here at the right. , this breed is believed to be one of the oldest breeds of dogs from the Iberian Peninsula. It was historically used to protect the sheep in the high mountain pastures in mid-Portugal, but these days, the Portuguese Police and the Portuguese Marines use some of these dogs to guard isolated military areas.

We don’t know if this is currently the case, but at one time, the Estrela Mountain Dog was one of 75 breeds on a list of potential canines restricted or banned in the United States.