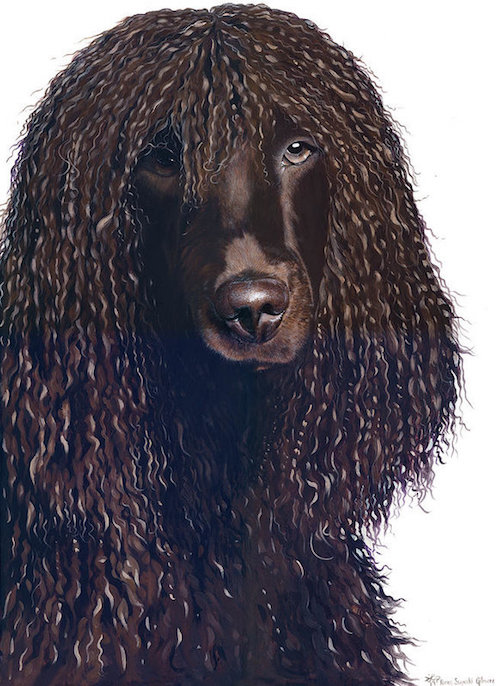 Part of having a breed with ancient ancestry clouded in mystery is that one doesn’t really know what’s behind one’s dogs. The Irish Water Spaniel is thought by many to be Ireland’s oldest native breed, and may be the only Irish dog with supernatural forefathers. Old timers believed the breed descended from the Dobhar–chú, translated as “Water Hound,” or “Hound of Deep.”

Described as a blood-thirsty, gruesome monster that lived in the loughs and isolated waters of Ireland, the Dobhar–chú was a mix between an otter and a dog (though other sources say it was a beaver and a dog). Dobhar-chú were highly aggressive, often killed unsuspecting humans, and usually attacked in pairs or in a group so that if one became tired, the other would help drag the victim into water (or chase it down until caught).  Think Loch Ness Monster, Irish style. Dobhar-chú were said to make a terrifying screeching sound when enraged. That’s what the old timers said, anyway. Water Spaniels are known to have wicked senses of humor, but as far as we know, no one has gone out of their way to anger one. To our way of thinking, why chance it. Just saying.

“Flurry” by Keran Sunaski Gilmore is available as a print and greeting card here.