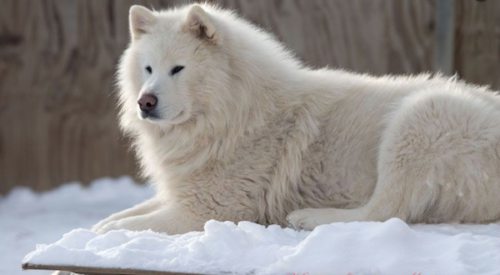 In and of itself, the photo you see here isn’t all that remarkable until you look again and realize that this dog is not a Samoyed. It’s a solid white Alaskan Malamute, the only solid color allowed in the breed’s standard with the AKC, UKC and FCI.  A solid white Malamute is unusual, and to our knowledge, there have been only five white AKC Champion Malamutes in the breed’s history.

They are remarkably beautiful since both their guard hair and undercoat are white, and the dog’s mask (and sometimes the ears and topline) have biscuit or buff-colored shading. A solid white Alaskan Malamute is also remarkably rare because its coloring is caused by a single recessive gene called “Melanocortin Receptor 1,” or MC1R.  It controls the production of black pigment (or eumelanin)  in the melanocytes, and when a DNA variant in the gene shuts down production of the black pigment altogether, it leaves only the production of yellow/red pigment in the melanocytes which extends the yellow pigment over the dog’s entire body.  When a puppy inherits this gene from both parents, it will dominate whatever color the dog was supposed to be by removing any black in the coat

A solid white Malamute doesn’t necessarily have poor pigmentation, though it’s common for such a dog’s nose to fade to a flesh color edged in black as the dog ages to maturity (what some people call “winter or snow nose”). The lips and eye rims aren’t effected, and because the thinking that no good sledge dog is a bad color, it has no bearing on the dog’s work ability or conformation in a show ring.

Several laboratories, such as the University of California/Davis offer DNA tests to identify carriers of the gene since just looking at a potential sire or dam is no indicator of its genetic suitcase.

Image: We’d love to credit the owner and/or photographer for this image we found uncredited on Pinterest!

One thought on “No Good Sledge Dog is a Bad Color”