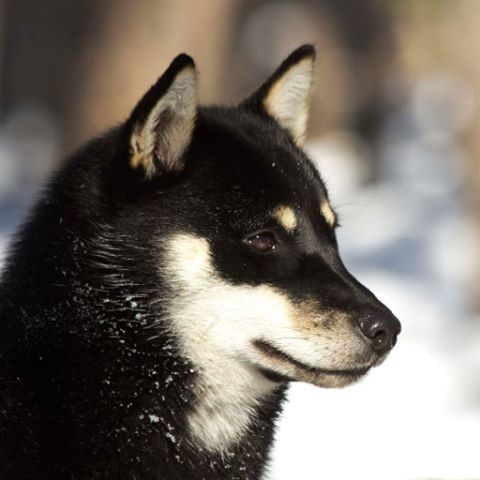 Accepted wisdom has been that the Hokkaidō Inu, native to Japan’s northern island, Hokkaidō, was named after the Ainu Tribe that came to the Tohoku region of Japan over 3,000 years ago during the Jomon period. They had with them a dog called the Matagi-ken, the Hokkaidō’s early ancestor, and in some circles, the Hokkaidō and Ainu are believed to be the first to inhabit Japan.

Hardy and fierce enough to hunt bears, quick enough to hunt deer, and clever enough to have been taught to catch salmon during a heavy spring salmon run, the dogs helped the Ainu survive in the rugged terrain of the Hokkaidō.  That same terrain kept the Hokkaidō’s genetic pool relatively pure and safe from interbreeding with other dogs later brought by the Yayoi people. Relative isolation also kept the breed a bit of a secret until Thomas W. Blankiston, an English zoologist,  “discovered” the breed in 1869. It was he who named the dog, “Ainu Dog, after the tribe.

Blankiston may have also been the first person to notice that animals in Hokkaidō seemed more related to northern Asian species, while animals found on Honshū in the south seemed more related to those from southern Asia.  A recent abstract, Phylogenetic studies of dogs with emphasis on Japanese and Asian breeds by Yuichi Tanabe posits that the first dogs entered the Japanese archipelago from southern or northern continental Asia during the Jomon Period and eventually spread throughout Japan. Other dogs were brought over via the Korean Peninsula over time, and crossbreeding occurred with the original dog breeds. The resulting offspring, he assumes, are the ancestors of the Japanese breeds that exist today.

It is something that can make one think, “Hmmmmm.”

The Hokkaidō received public attention in 1902 when Imperial Japanese Army soldiers on a military training mission became lost in a blizzard while crossing the Hakkōda Mountains of Aomori Prefecture en route to Tashiro Hot Spring. The 199 deaths during a single ascent make it the world’s largest mountaineering disaster in the modern history of mountain climbing.  The Hokkaidō ‘s ability to withstand very cold temperatures made the dogs part of the search effort for survivors, of which there were eleven.  How cold was it? Two days after the soldiers had set out,  a temperature of -41 degrees (-41.8 Fahrenheit) was observed, the lowest in Japanese weather observation history. Of the 210 soldiers, 199 had frozen to death.

In 1937, the Hokkaidō was selected to be on Japan’s protected rare species list which is when the Ministry of Education officially changed the breed’s name from Ainu dog to Hokkaidō-Inu.

A commercial for SoftBank, a Japanese telecom company, made more Americans aware of the breed in 2007 when it won the ACC Grand Prix Minister of Internal Affairs and Communications Award, and the company director, an American, helped spotlight the breed in the United States:

That said, the Hokkaidō is still rarely found outside of Japan. In 2017, only 300 dogs were registered between two registries, the Hokkaidō Ken Hozonkai (DOKENHO or HKH) and the smaller, less common Hokkaidō Ken Kyokai (HKK).  No one wants to see a breed explode in numbers that can be a portent of the breed being neglected or taken for granted, but neither do we want to see the breed vanish into extinction.