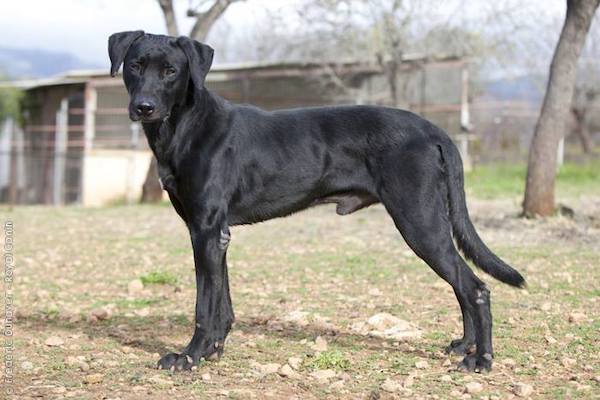 Most of us will sail through life never having laid eyes on the breed seen here, but even if we did, we might think we saw a black Labrador Retriever, or a Lab mix.  Au Contraire! This is a Majorca Shepherd Dog – recognized by the United Kennel Club and the FCI as the Ca de Bestiar – and it isn’t a sporting breed, but a naturally gifted herder.  A smaller version of the Cao de Castro Laboreiro of Portugal, this breed is a symbol of Mallorca, one of Spain’s Balearic Islands in the Mediterranean, and a source of pride.  This is understandable. The breed is the canine version of the people of Mallorca. Like them, it is friendly but cautious of strangers, and while not prone to fisticuffs, neither human or dog will fail to protect its family.

The breed was developed to work under the extreme conditions of intense heat of the Balearic Islands, and while having a black coat would seem to be a disadvantage to the dogs,  heat doesn’t seem to factor into their ability to do their job well. As an aside (there’s always an aside in a breed’s history), the breed’s black color served as “cover,” and one reason why bandits were said to have used the dogs to attack travelers at night in the 16th and 17th century, and as guards against thieves and marauders.

As rare as the breed is outside of its country of origin, the Ca de Bestiar is quite popular in Spain, and even common in farms and villages. As is so often the case in a breed’s history, however, this one nearly came to the brink of extinction. An initiative taken by Alonso Guasp in 1970 spearheaded a movement to save the pureblooded Ca de Bestiar, and in 1980, he Fédération Cynologique Internationale officially recognized the breed.

Josep Biblioni, Secretary of the Club del Ca de bestiar, once explained the process of recovery this way: “This breed, emblematic of and the standard for other indigenous breeds, began to be recovered by a small group of people twenty years ago. After much searching – hours, days, weeks, months, and years – a prototype of the breed was produced and then a handful of years later the prize: recognition by the F.C.I.

“To produce the standard, a group of enthusiasts and lovers of this dog began to favor pups selected as the best examples of the characteristics they had been looking for. It can be said that today they have already achieved the uniformity and homogeneity that make us feel satisfied, but there is still more work left to do.”

“Year after year throughout the entire island, the Club de Bestiar organizes Majorcan shepherd dog shows with the conviction that this is the best way to stimulate and promote the breed. These shows have been made possible by the collaboration of dog breeders and exhibitors, and the sponsorship of municipal governments of towns where agricultural and livestock fairs take place with the wide support of the general public.”

Currently, it’s thought that there are about 4,000 of these dogs around the world, but only one thousand of them could be considered ‘excellent.’