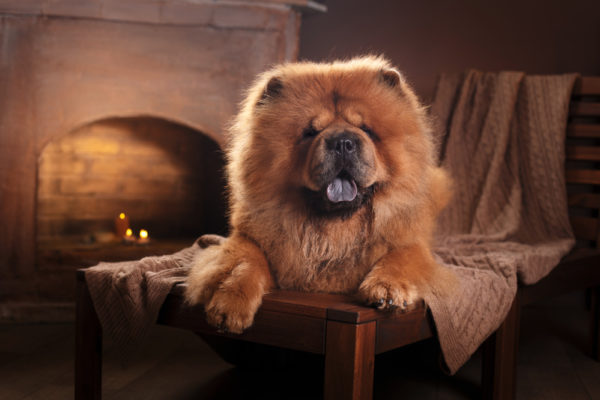 As the legend goes, it was when the world was created and the stars were put into the heavens that a few pieces of the sky fell to earth. There, they were licked up by a curious Chow Chow forever staining his tongue, and that’s how Chow Chows came to have the characteristic blue/black tongue.

The only other theory is that the breed inherited their tongue color from a bear. Outlandish, right?

On a more serious note, the Chow Chow shares this trait with the Chinese Shar-Pei, as well as with polar bears, giraffes, and several cattle breeds.  We don’t know about the other animals, but we know that Chow Chow puppies have pink tongues at birth which tend to darken to their characteristic blue-black color by 8-10 weeks of age, or about the time their eyes open. Some dogs’ tongues never cover in color completely,  and small spots or splashes of pink may be evident. Senior citizen Chows, and Chows Chows with the dilute coat colors of blue and cinnamon may also sometimes lose their tongue pigment as they age and develop pink spots.

Despite it being an ancient breed, there doesn’t appear to be documentation as to why the breed has blue-black tongues, though we know they had them in the 1820s when the breed was exhibited at the London Zoo under the moniker, “wild dogs of China.”  Zookeepers took note of the tongue coloring and came to see the trait as evidence of purebred offspring resulting from managed breedings. The Chow Chow Club of America takes it seriously enough to have included it in the breed standard: Mouth and Tongue – Edges of the lips black, tissues of the mouth mostly black, gums preferably black. A solid black mouth is ideal. The top surface and edges of the tongue a solid blue-black, the darker the better. Disqualifying Fault – The top surface or edges of the tongue red or pink or with one or more spots of red or pink.

Scientifically speaking, the tongues (and gums) are evidence of deposits of extra pigment not unlike the deposits of pigment found on humans with a birthmark or freckles. Over thirty other breeds can develop black spots on the tongue, though the Chow Chow and Chinese Shar-Pei “rock” the solid black/blue tongue among canines. Why there is extra pigmentation in these two breed has yet to be explained, but as far as giraffes go, the Giraffe Conservation Foundation theorizes that the pigmentation is meant to protect giraffes from sunburns as they nibble on leaves. The blue-tongued skink of Australia also has a blue tongue which in this lizard’s case is intended to scare away predators along with a hissing sound.  Now if the Chow Chow hissed and ate leaves, we might have a better explanation.