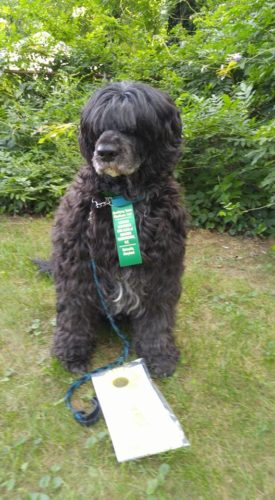 Our series, Not Just a Pretty Face, has been introducing you to dogs who are titled at both ends of their name, evidence that disproves the charge made by ignorant souls who say that today’s purebred dog can’t do the job for which their breed was created, or that they just can’t work at all.

Meet “Best,” a ten year old Portuguese Water Dog whose kennel name includes much of the alphabet:  Ch Akire Baby You’re the Best at Del Sur, CD, PCD, BN, RA, THDN, CGCA, TKN, MAC. Best’s titles indicate that he is a conformation breed champion, that he has obedience titles as a Companion Dog, Preferred Companion Dog, and Beginner Novice, he has Rally titles in Rally Advanced and Rally Novice, and that he has passed the test for a CGC, or Canine Good Citizen title. For fun, he has his TKN, or Trick dog novice title. 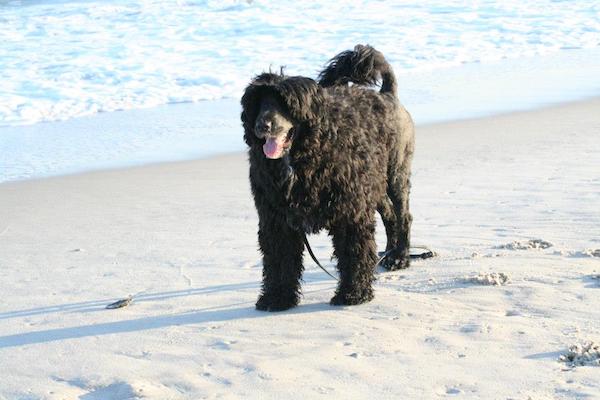 Best has his THDN, or Therapy Dog Novice title which means that he had made at least ten visits as a therapy dog, though Best has far more visits under his “collar.”  He is certified through Therapy Dogs International, and his favorite work is visiting special needs kids, and kids on the autism spectrum.

Best also has a MAC-1, or Multiple Achievement certificate that is awarded by the Portuguese Water Dog Club of America. It’s bestowed upon a Portuguese Water Dog who has earned a minimum of seven titles in at least three venues. Clearly, Best is more than a pretty face, though his owner, Nita Ghei, Ph.D., J.D., shares that he can be pretty goofy.

If you have a dog who has proved that he or she is not just another pretty face by having excelled in both conformation and other disciplines, we want to hear about it. Send your over-achiever’s “resume” and photograph to us here. To see the other “pretty faces,” do a site search on, “Not Just Another Pretty Face.”