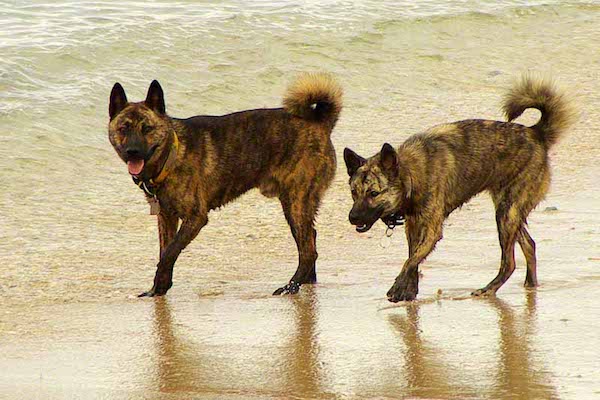 There are, it’s believed, fewer than 800 Otterhounds worldwide, an alarming state of affairs for a terrific breed. As concerning as that is, there is a breed believed to be even rarer, and that is the Ryukyu Inu – now believed to be down to only around 400 dogs.

The breed that originally hunted wild boars in the Yanbaru forest is considered a National Treasure on the Island of Okinawa, and in1995, it was declared to be a protected breed. A a preservation society was established in 1990 to prevent the breed’s extinction, but the difficulties of breeding the dogs, and the large individual burden on each member resulted in a lack of activity, and the society is now all but defunct outside of Okinawa. It hasn’t issued a pedigree for almost 13 years.

An article published in 2017 in The Ryūkyū Shimpō (an Okinawan newspaper) by Yo Kakazu, however, suggested a bit of hope for the breed. Kakazu wrote of five second year students from Chubu Norin High School who took on the challenge of preserving the Ryukyu-Inu. It all started when a Ryukyu-inu named “Shoto” was adopted from the preservation society by upperclassmen attending the same high school as the five students.

After watching the older students study the breed’s characteristics, an interest in the species was awakened in the younger students, all sixteen years old at the time.  One of them, Yuto Kamejima, was tasked with caring for Shoto at the recommendation of the upperclassmen, and at the time the article was written, the five students were about to start a “bride search” for Shoto. If successful in finding a mate, the students planned on recruiting help to increase the number of pure-bred Ryukyu-inu dogs. We don’t know how successful the kids have been. One of the biggest issues facing the Ryukyu Inu is inbreeding. One source indicates that all current Ryukyu Ken are descendants of a small pack from the 1980s. At their peak, there were more than 1,500 individuals, but as of 2015, it’s thought that there are fewer than 400 dogs. Finding two nearly completely unrelated individuals is very difficult.  To deal with this, the Ryukyu Inu Hozonkai, the breed-specific registry, began registering dogs “On Merit” if they met the breed standard, and still continue to do this, presumably while studying bloodlines.

The Ryukyu isn’t recognized by any clubs other than the Ryukyu Ken Hozonkai which also  issued the breed standard.