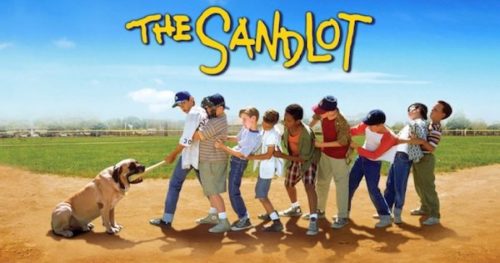 There have been a lot of great baseball movies produced over the years, from “The Natural” and “The Pride of the Yankees,” to “Bull Durham” and “A League of Their Own.” Among dog lovers, however, certainly “Sandlot” would have to be in their top five. It was sweet, nostalgic, and did a nice job of showing that the canine “villain,” the immense “Hercules” (a.k.a. “the Beast”), was really a sweetheart portrayed by a purebred dog.

In “Sandlot,” (originally intended to be called “The Boys of Summer” but which had to be changed because there was already a famous baseball book by the same title), “Hercules” was played by two Mastiffs, but primarily by one dog named Ch. Mtn. Oaks Gunner who spent most of his film time hoarding baseballs, foiling retrieval schemes, and chasing a character in a climactic scene that ultimately ended with a lot of face-licking. Other scenes required a puppet so large, it required two people to operate. The puppet was built by animatronics designer, Rick Lazzarini, who also designed costumes for Spaceballs (to see behind-the-scenes of the puppet, look here).

Actor, Tom Guiry, who played the character, “Smalls,” said, “They put like a whole jar of Gerber baby food on the side of my face, so that scene where I’m looking to the side, the other half of me is just slathered in this baby goo. That dog had a field day on my face. I’m a dog-lover though, so it didn’t really bother me.”

Coincidentally, Hercules shared his name with Hercules Morse from the Hairy Maclary series of books who is also an English Mastiff.