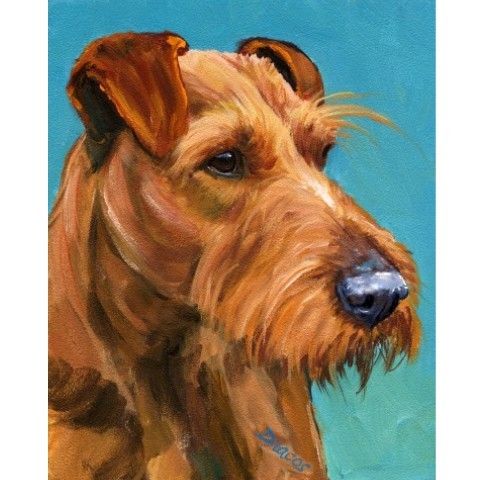 Of the four terrier breeds from Ireland, the only one with an all-red coat is also the oldest of that country’s native terriers – the Irish Terrier.

The breed nicknamed the “d’Artagnan of the show ring” for his smooth style is thought to have descended from black and tan terrier-type dogs of Britain and Ireland. The solid red color, however, was standardized by the end of the 19th century.

Irish Terriers were the first of of the terrier group to be recognized by the English Kennel Club as a native Irish Breed, and the Dublin dog show in 1873 was the first to provide a separate class for them. The first breed club was set up in Dublin in 1879, and a year later, Irish Terriers were the fourth most popular breed in Ireland and Britain, no doubt helped by King Edward VII whose beloved ‘Jack’ he called, ‘the best dog I ever had.’  During war, these dogs performed courageously as guard dogs, vermin control, and friend to the soldiers with whom they served and died.

Despite all this, the Irish Terrier is among the breeds listed on The Kennel Club’s Vulnerable Breeds list. A dog nicknamed “daredevil” for his utter contempt for danger deserves better.