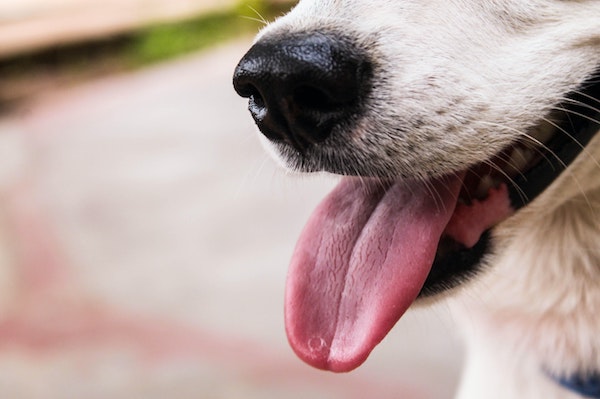 A dog’s tongue is a complex organ, and one of its most visible “landmarks” is the median groove, or median sulcus (“hairy tongue”). It’s the groove that runs down the middle of a dog’s tongue dividing it into two symmetrical halves. 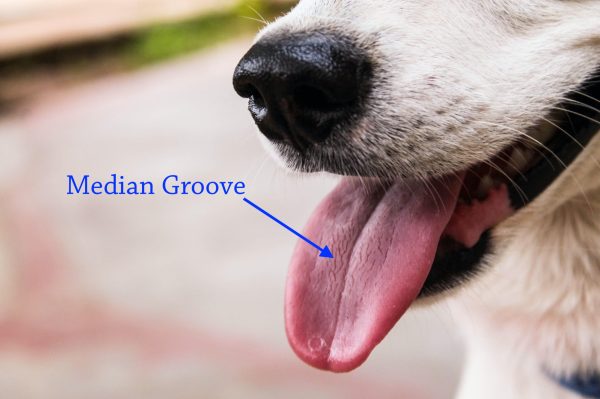 There are other cool things to know about a dog’s tongue (including the well known fact that dogs pant to sweat), and we share just a few of them below.

A dog tongue is essentially a muscle that contains both serous and mucous glands, vessels, and nerves. It’s important for chewing, swallowing, and tasting, though they use their sense of smell far more than their sense of taste when deciding what to eat. Dogs can taste bitter, salty, sweet, and sour, and while they only have one-sixth the number of taste buds as humans (around 1,700 to our 10,000)  they still have more than a cat.

To drink, both cats and dogs dip their tongues into water and quickly retract it back, creating a column of water that they bite and swallow. When they do this, cats move their tongues pretty quickly (up to four laps per second), but dogs curl the tip of their tongue backward to spoon the water up into their mouths. The bigger the tongue, the bigger the “spoon” and the sloppier the drink, as big dog owners can attest.

Dogs lick to feel calmer under stress (called a calming signal), and that’s because licking releases endorphins in a dog’s brain. Excessive licking isn’t normal, however, and if that happens, it might be time to consult a vet.

Are there differences in tongues based on breed? Most readers know that the Chow Chow has a blue-black tongue, but so do the Chinese Shar-Pei, Eurasier, Thai Ridgeback, and Phu Quoc Ridgeback.  Dark spots can appear in any breed, but some believe they are more common in breeds that have black points.  We choose to defer to breed standards, and according to the AKC, a spotted tongue is a major fault in a Shar-Pei,  and a solid pink tongue is a disqualification. In a Chow Chow, the top surface and edges of the tongue are a solid blue-black, the darker the better, but when those top surfaces or edges are red or pink, or have one or more spots of red or pink, that’s a disqualifying fault.

There isn’t one reference to tongues in all of the AKC Herding and Terrier Groups, and in the Hound Group, the only mention of tongues has to do with “voice.” This is also the case in the Sporting Group, but only the Sussex Spaniel is called to be in the “habit of giving tongue when on scent.” In the Working Group, only the Akita standard mentions tongue by calling for a pink one, and any references to tongue in the Toy Group have to do with the tongue not being visible when a dog’s mouth is shut.

True in all breeds is that a pale pink or almost white tongue isn’t good as it can be a sign of severe anemia, an immune mediated disease, or internal bleeding. It never hurts to routinely inspect your dog’s tongue.

Some breeds are thought to have longer tongues than other breeds, but only (it seems to us) because certain breeds have held World Records. Such a record doesn’t mean an entire breed has long tongues, but we share those record-holders, anyway:

As of March, 2022, the current Guinness World Record holder for the longest dog tongue (at 7.3 inches) is an 8-year-old St. Bernard from Sioux Falls, South Dakota named, “Mochi.” Before that, a Boxer named, “Brandi”  held the Guinness World Record for having the longest dog tongue ever with a staggering 17-inch tongue! And then there was “Puggy,”a Pekingese who held the Guinness World Record for a time. Her tongue measured 4.5 inches which, for a small dog, must have seem quite long, indeed. Some have added Rottweilers, Mastiffs, Labrador Retrievers and Siberian Huskies to the list of long-tongued breeds, but we defer to the breeders and owners as to whether they think this is true.

As an aside, there is a medical term for an abnormally large tongue – Macroglossia – and it’s a rare condition usually seen at birth when a puppy’s tongue is too large to allow them to latch onto a nipple and nurse normally.

Most of us regard our dogs’ licks as “kisses,” and we hate to put a damper on things, but puppies often lick their mom’s face and lips when they want her to regurgitate food for them. According to Dr. Patty Khuly, an award-winning veterinarian, dogs “kiss” other dogs to indicate that they, as the kissers, are “lower” in status than the recipients of the kissing. Dr. Khuly also says that some breeds tend to “kiss” less than other breeds: Arctic breeds, like Huskies, Malamutes, Samoyeds and American Eskimos, don’t lick much by nature (though Dr Khuly says they can learn the behavior).