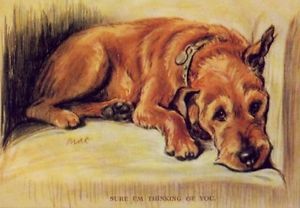 The Irish Terrier (seen in our image) is called upon to be bright red, golden red, red wheaten, or wheaten, a “strawberry” shade of wheaten. The operative color: Red. There is only one terrier breed of Ireland, however, that is not defined by a single color. Can you name it?

A centuries old breed, dogs of this breed retain “antique” features once common to many early terrier types, and they remain unrefined to this day. They’re longer than tall and have a double coat of medium length.

Before badger trials were outlawed in Ireland in 1966, this breed was required to earn its “Teastas Misneach,” or Dead Game Certificate, in order to earn its Championship. A tough and fearless breed that has a terrier energy and tenacity when called upon, it has a decidedly an un-terrier-like, laid-back temperament all other times.

This should help. According to Irish lore, this breed was used as turnspit dogs to turn meat over fires for cooking. 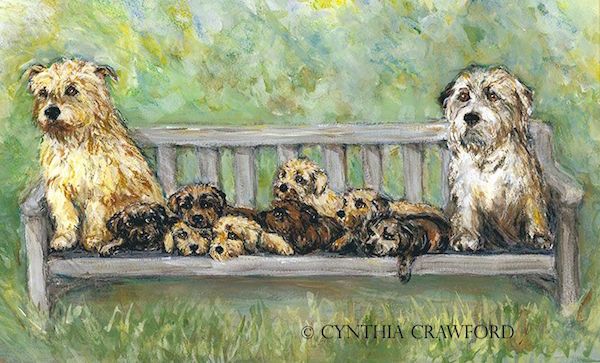 The only terrier breed of Ireland not defined by a single color is the Glen of Imaal Terrier. From the AKC breed standard: Wheaten, blue or brindle. Wheaten includes all shades from cream to red wheaten. Blue may range from silver to deepest slate, but not black. Brindle may be any shades but is most commonly seen as blue brindle, a mixture of dark blue, light blue, and tan hairs in any combination or proportion.

2 thoughts on “This One Terrier of Ireland is Different”