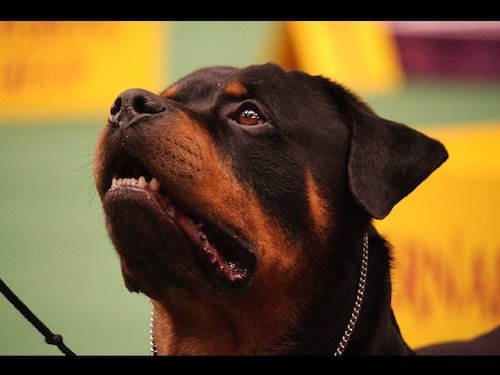 Good news came from the AKC this past week when it reported that in 2016, the Rottweiler was the eighth most popular breed, its highest ranking in breed registrations in 20 years. The breed has risen nine spots over the past decade and is poised for a comeback (though why the breed dropped in popularity at all is a puzzlement to those who know and love this terrific breed). Certainly, there was a skewed perception that Rotties were the “bad boys” of the canine world, a view fostered by movies that portrayed the breed as junk yard dogs or vicious police dogs. Reputations die hard. An old story among drovers (for the Rottweiler was a herding/drover dog) went like this:  After drovers sold their cattle after a long drive, they headed to the bier Keller to celebrate, but first, would tie the money they’d made at the sale around their dogs’ necks. They knew that no matter how drunk they got, their money would be safe until they woke up in the next morning. Loyalty mistaken for meanness.
With industrialization, the droving dog found itself without a job, but in 1910, the German Police Dog Association recognized the Rottweiler’s talents as police dogs. Once again, however, modernization would come to impact the breed. A K9 handler must be able to lift their dog in and out of a car and through windows, toss him over a fence, and if necessary, put the dog over their neck and carry her out. Rottweilers, as compared to other breeds, such as a GSD or Malinois, are heavy, and as such, unsuited for certain scenarios. Much depends upon the police department and the nature of the work required of the dog. In the UK, the West Midlands police department replaced its GSDs with Rottweilers (five dogs, as of 2004), and other forces were said to be considering using Rottweilers, as well, included one in Scotland.
Photo by Mary Bloom