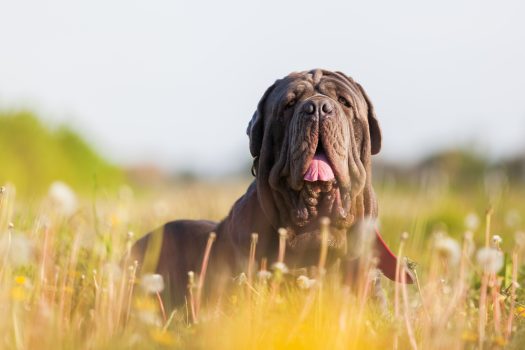 As a rule, pacing is regarded as a fault in a show ring where most breeds are judged at a trot. To review, a trot should be a two-time gait in which the opposite and diagonal legs go in pairs, while pacing is when the legs on the same side of the dog work in pairs. Pacing isn’t always indicative of a structural problem, it is actually comfortable for a tired or bored dog. It’s also something that can happen if a dog is being moved at the wrong speed, or if he or she is out of shape (repeat: The dog gets tired). Sometimes, pacing is a structural issue, and we’ve covered that topic in other posts. Today’s post is about pacing in a breed where it is not only “ok,” but it says so in its AKC breed standard.

Most fanciers know that ambling or pacing at slower speeds is acceptable in the Old English Sheepdog, and that is mentioned in its standard. Fewer may know that pacing in a Neapolitan Mastiff conformation ring is also acceptable.

The first Neapolitan we ever saw many years ago gave us the impression of a reticulated dog, one that moved one section at a time. It was unsettling, but we had a lot to learn about this breed, including the fact that what we were seeing was actually very typey breed movement. The Neapolitan’s gait is fluid and flat, his bones and articulating joints seemingly undulating beneath his skin.

Mind you, when he needs to be, a Neapolitan Mastiff is a different animal, so to speak. While patrolling his territory and moving out at a trot, his hindquarters have enough power to propel his considerate weight and those forelegs well forward. He is capable of bursts of rushes that reach high speed in a matter of a few yards. The Neapolitan, however is not a long distance galloper, and pacing is an effective energy saver and method of weight transference. For covering large areas, say, an estate, it’s a valuable asset, and when not on high alert, Neapolitans often amble. This amble is a kind of pacing that should be considered a breed specific feature. Indeed, the AKC breed standard reads, “Pacing in the show ring is not to be penalized,” while the FCI standard indicates that “pacing is tolerated.”

There are judges who disagree about the level of pacing that is to be tolerated. To our amusement (but probably not to owners and exhibitors) one article we found suggested that Neapolitan Mastiff movement causes more grief for an average AKC judge more accustomed to seeing “normal” dogs than few other breeds.

Image: Neapolitan Mastiff in a dandelion meadow/DepositPhoto; Our post title is a play on the book title, Unsafe at Any Speed