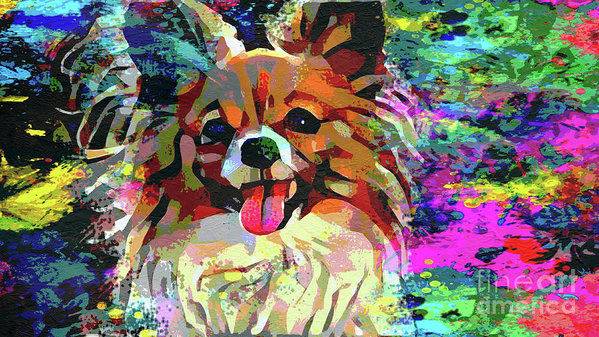 The current AKC Papillon standard just might be one of the more precise breed standards when it comes to color and markings. It indicates not only that the breed is always parti-colored or white with patches of any color(s), it goes to specify where those colors and patches may appear. To paraphrase: Colors other than white must cover both ears on the back and the front.  That color must extend (without interruption) from the ears over both eyes. While a clearly defined white blaze and noseband, along with symmetry of facial markings is preferred, a solidly marked head isn’t disqualified, but, an all white dog, or a Papillon with no white at all is (disqualified).

At one time, however, “dwarf spaniels,” (an early name by which Papillons were known) were often solid-colored. These days, no two Papillons are exactly alike because the possibilities for color and markings are nearly unlimited; there are five acceptable markings and five acceptable colors for the breed (and ten more colors not acceptable in a conformation ring). One of them is the liver sable which to an untrained eye looks like a standard red or red sable Papillon. This is a dilute color and genetics of this color also impact nose and eye pigmentation of the nose and eyes.

We came across a conversation re: solid colors in a breed forum, and as there is no copyright mark on the page, we infer that it’s safe to share the passage of interest:

“In 1923, the Papillon, still predominantly of the Phalene variety, invaded England. They were imported by Mrs. Gordon Gratrix and Mrs. M. B. Cooper of Eden Lodge, Hornsea, E. Yorks. Breeders who joined to produce the first English Champion, Ch. Gamin De Flandere, in 1925 from second generation imported Belgium stock and an offspring of the 1st U.S. champion, Jou Jou.

“The cross breeding of drop-ear Papillons with Pomeranians created the erect ear variety of the butterfly dog. This was the desired result, and to the delight of enthusiasts, the erect ear proved to be dominant. The genetic experiment had its pitfalls however, such as the straight Spitz rear so obvious in the tintype. It also introduced the Pomeranian’s undercoat, solid colors, liver or self-color pigmentation, and small, high set ears. Desirable characteristics for Pomeranians but undesirable for Papillons. To overcome these characteristics, the earliest European and English standards, precursors of our current standard, incorporated various prohibitions that are present to this day in the AKC approved standard for the breed. They are generally presented as “faults” and “disqualifications”. The prohibitions were, and still are, couched in such severe terms to protect the breed. They comprise most of the parts of the official standard which characterize the breed and must be considered by anyone judging the breed.”​

As always, we defer to breed experts, and we especially welcome educated insights into the aforementioned reference to cross breeding with Pomeranians. We were able to find one other source – Pedigree Dog Food – that also made note of crossbreeding with the Pomeranian to create the erect-eared Papillon (and by default, solid colors). In the writings of Baron Houtart, however, he absolutely rejected the notion at the guess of a cross with the Pomeranian.  He pointed out that spitzes “have small ears, pointed toward the front, like ‘the ventilators of a steamer, and not spread like the sails of a ship.’  He further asserted that it is incredible to believe such an infusion of such blood would have left no other traces, and would not have affected the shape of the foot, the texture of the coat, or the length of the body, none of which appears in the Papillon.
What say you, Papillon owners?
Image: “Let’s Play” by Jon Neidert is available as fine art, and in lifestyle and home decor items here.