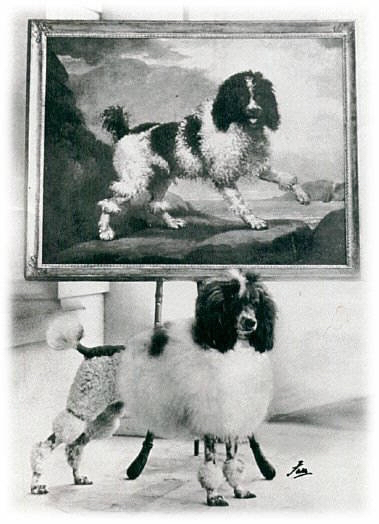 It isn’t for us to weigh in on Parti-colored Poodles (they’re presently not accepted by the AKC for the conformation ring, but are acceptable in performance disciplines) beyond why they may be called “Parti” Poodles. It’s not shorthand for the English word, “partial,” at least, not originally. But first, what is a parti-colored Poodle?

According to the United Kennel Club (which recognizes them), it’s a Poodle that is at least 50% white with patches or spots of other acceptable colors. The gene is recessive and requires two copies to produce a such a dog.

The term, “parti” is thought to have become popular around the early to mid 1900s when dog shows became especially popular. In French, the word for, ‘partially’ is “partiellement,” and some sources site that as the origin of the word, “parti.” Others point to the French word, “partager,” which means, “to divide” or “split” and that, of course, could refer to a Parti-Poodle’s color being split, or divided into two different colors. Partager would have been shortened into “Parti.” But wait, there’s a third theory, and that is that “Parti” refers to the dog being of “particular” colors.

To our knowledge, there were four Parti-colored Poodles that gained their AKC championships, but they were either Toy Poodles or Miniature Poodles who got their titles when both were still considered a separate breed from Standard Poodles (and thus, judged under a different standard. We always defer to breed experts and stand corrected if we’re wrong, but we think those dogs were Ch. Onne, Ch. Buddy, Ch. Wonderful Sensation, and Ch. Verrmilyea’s Candy Girl.

4 thoughts on “The “Parti-Poodle:” Word Origin”