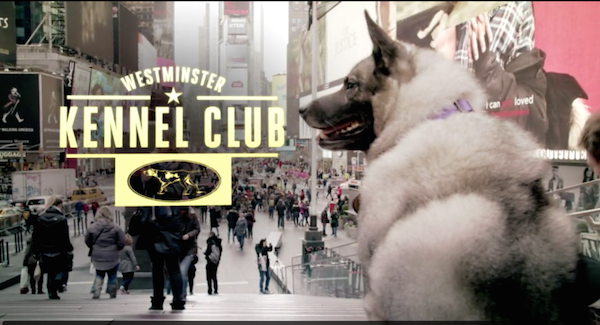 Some of you may have watched the Westminster Kennel Club Dog Show on TV or live streaming this past week, and if you watched the Hound Group, you saw Pat Craige-Trotter handling one of her Vin-Melca Norwegian Elkhounds. As proof that dogs keep us young, the woman you saw gaiting her dog around the green carpeted ring is an astonishing 82 years old.  But we digress.

The Elkhound is the national breed of Norway, and until it was replaced by the Swedish Lapphund, it also served as the national dog of Sweden. The breed is so beloved that when the Norwegian Kennel Club held its first show in 1898, it chose the Norwegian Elkhound as the breed to appear on the club’s medallion. Renowned for its amazing scenting ability, the breed is said to be able to sent a bear or elk under favorable conditions as far as three miles out!

Our image comes from the blog, Lisa Unleashed. Lisa, a colleague of ours at Westminster Kennel Club Dog Show, is a Norwegian Elkhound fancier whose dog appeared in some wonderful “promos” for the dog show. A talented writer, we think “Elkie” folks will enjoy her work.