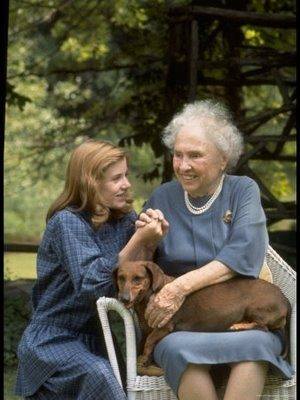 For eleven years, (1963–1974) Patty Duke held the record for being the youngest person (16 years old) to win an Academy Award for her portrayal of Helen Keller in “The Miracle Worker.”  It was as a twelve year old that Duke got to meet Ms. Keller while performing in the play. Duke remembers the day: “I went to Miss Keller’s house in Arcan Ridge, Connecticut. We had the most delightful day! It was awesome to watch her come down the stairs in her beautiful blue dress. She never touched the railing. She had a thread on the opposite wall and she would put her pinky on that thread and walk down the stairs in such a stately manner. After the great stately walk down the stairs, she became like a giddy girl! We had the best time. We must have spent the whole day there. She was eager to know how much I loved playing her.” The visit was captured with this photograph of the pair with Ms. Keller’s Dachshund, “Sunshine.”

Although Helen had many dogs throughout her lifetime, including a Great Dane named “Belle,” a Scottie named “Darkie,” German Shepherds, Collies, and Sunshine, she never used any of them as Guide Dogs.