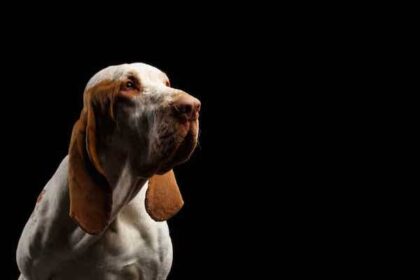 Flaccid. It’s a good word that has fallen out of favor, ruined by those who titter at its anatomical allusions. No other word, not flabby, loose, saggy or soft quite conjure up the same meaning, and no other AKC breed standard uses the word besides the one belonging to the Bracco Italiano. The paragraph using the word appears exactly the same in both the AKC and FCI standard, and it has to do with the lips: Upper lips well developed, thin and floppy without being flaccid, covering the jaw; seen in profile, they overlap the lower jaw slightly. Seen from the front, they form an inverted “V” below the nose; the corner of the lips must be marked without being droopy.”

Lips matter in a hunting breed, and in this breed, the lips are one of its most distinctive features. Hunting dogs need large teeth for gripping game during retrieving. Looser lips offer continuous protection around the jaw and teeth because during hunting, sharp teeth could severely injure the surrounding skin and gums if the dog’s lips and flews were tight. Pendulous lips also help transport scents to the dog’s nose for better olfaction. Check out the Bracco’s cheeks in the video below and you’ll see evidence of how the lean and reasonably flat cheeks connected to those lips described in the breed standard serves to “recycle” scent as the dog stalks a dove. There are muscles in a dog’s cheek, and flaccid lips suggest a lack of tone necessary for this dog to do what he does:

The lips, of course, are part of the head, and the head is so important to breed type that the FCI standard devotes no fewer than 451 words to describing the head and its components.

Image by by seregraff from Adobe Stock Photo