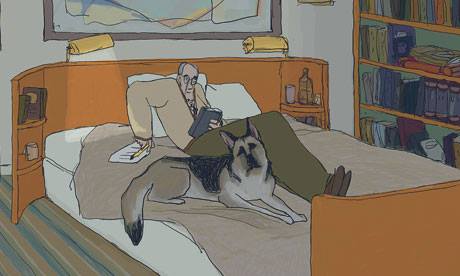 When Freddie Doyle, a petty thief, was sent to prison, his dog, “Tulip,” a loyal, loving German Shepherd Dog found herself in a bad way. Doyle’s family took her in, but she was kept in miserable conditions.

Distressed by her circumstances, Doyle’s boyfriend, JR Ackerley, author, literary editor of the Listener, and best friend of EM Forster, took her in.  Now Ackerley was well into his 50s when he acquired Tulip, but in this ebullient dog, the distant Englishman found the friend he’d been searching for all his life. Their story is told in Ackerley’s best-known book, “My Dog Tulip” first published in 1965, two years before he died at 71.

The story was made into an animated film by Paul and Sandra Fierlinger in 2009. They divided it into fourteen sections made over a two and a half year period, and while no paper was ever used, the Fierlingers drew and painted about 60,000 drawings comprising about 460 scenes and about 600 individual background paintings utilizing a French, bitmap-based digital animation software package.  In total, the film included 58,320 renderings.

Christopher Plummer (the Captain in The Sound of Music) narrated Ackerley’s voice, Isabella Rossellini provided the voice of the veterinarian, and in her last film performnce, Lynn Redgrave provided the voice of Ackerley’s sister, Nancy.  My Dog Tulip premiered at the Annecy International Animated Film Festival on June 10, 2009, and at the 2009 Ottawa International Animation Festival, it received Honourable Mention for Best Animated Film.  The late Roger Ebert called it, “the Best Animated Feature Film of 2010,” and in 2011, My Dog Tulip would go on to win Grand Prix for the best feature film award at the World Festival of Animated Film Zagreb.

The movie trailer appears below:

In 2018, Paul and Sandra Fierlinger decided to release the two hour film on-line for all to see. You can view it in its entirety here!

2 thoughts on “My Dog Tulip”