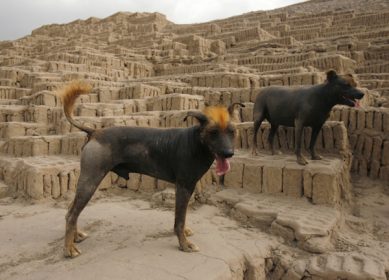 The national dog of Peru has many names, and the two “official” ones are a mouthful: The Peruvian Inca Orchid, and in Spanish, Perro sin pelo de Peru (or Peruvian hairless dog,though sometimes, a pup is born with a full coat).  Friends simply call them PIOs, perros flora, “flower dogs,” or even “moon dogs” or Moonflower Dog (because of the breed’s alleged aversion to the sun).

The Spanish, as the legend goes, first encountered these dogs in caves filled with wild orchids. It was an American dog fancier, however, Jack Walklin, who coined their present name. After coming across the dogs during a visit to Peru in 1966, he combined their known monikers and came up with “Peruvian Inca Orchid,” the name he gave the eight dogs he brought back to the United States. Another breeder, Jenny Tall, introduced some of the dogs to Europe, and that resulted in Germany also calling the breed by its American name. It stuck.

These days, the breed that was once a street dog is now the “it” dog often seen in upscale, affluent neighborhoods of Lima. Thanks to the efforts of dedicated individuals like Italian-born Ermanno Maniero, who spent years working to get the breed recognized after seeing them during road trips around Peru with his parents, the breed is in good hands. The Peruvian government also helped. Several years ago when it realized that its only world-registered dog breed was close to extinction, it passed a law mandating that all archeological sites along the coast have at least one pair of Peruvian Inca Orchids on site. Smart move. The law helped save the breed, raise awareness of it, made it a source of pride, and probably created a cottage industry of PIO-related goods.