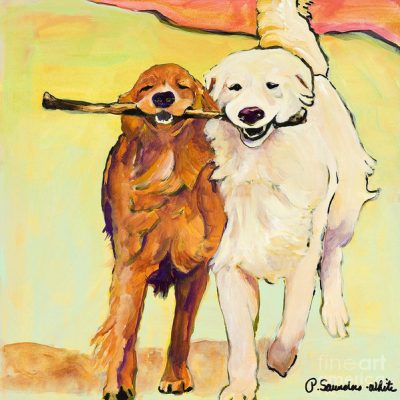 Rumors are hard things to dispel, especially in the dog world, and one of the more popular ones is that the Golden Retriever descended from Russian circus dogs known as Russian Trackers. As the story goes, the dogs were purchased from the circus by Sir Dudley Marjoribanks, later the first Lord Tweedmouth, and taken to Tweedmouth’s estate in Scotland, “Guisachan.” There, their prowess as hunting dogs encouraged Tweedmouth to breed them. Later, a sandy-colored Bloodhound was introduced to improve the dogs’  scenting ability. All Golden Retrievers, the rumor continues, are direct descendants of this out-cross breeding.

This story was accepted as fact until the early 1950s when a descendant of Lord Tweedmouth released the original studbooks. Elma Stonex’s research into the handwritten books lead to the publication of new information in the British “Dog World” Magazine that directly challenged the circus dog story. Factually, Lord Tweedmouth, purchased “Nous,” a yellow retriever, from a cobbler in Brighton in 1864 (other sources say 1865), and bred him to “Belle,” a liver-colored Tweed Water Spaniel. All Golden Retrievers today are descended from the four puppies produced by “Belle” and “Nous.”

The circus story is certainly romantic, but to our knowledge, has never been substantiated.

Image: “Stick With Me by Pat Saunders-White is available as a print, poster, pillow, pouch, and much more here.