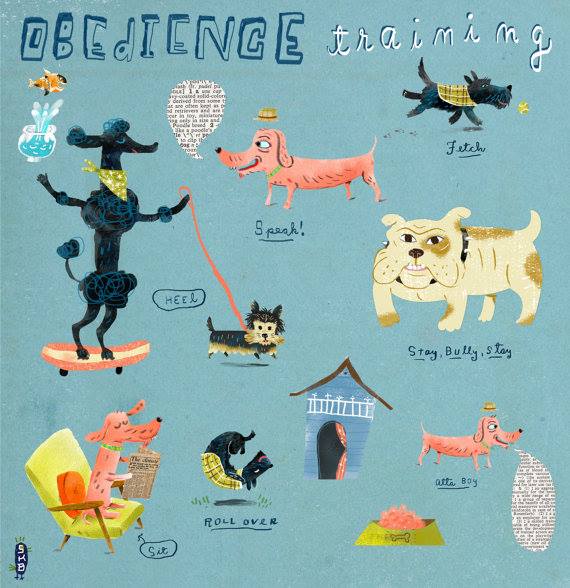 It’s often referred to as the “PhD” for dogs, the highest obedience honor a dog can receive. We’re speaking of the OTCH title.

In 1976, there were some 1,166 obedience trials in the United States, events that were so well attended that that some shows attracted up to 500 entries. Some classes at east coast shows averaged between 26 to 40 dogs! At the time, the #AKC provided obedience titles for dogs meeting certain standards of performance, but they weren’t contingent upon defeating other dogs. That changed in 1977 when the AKC introduced the OTCH title. In 2014,123 OTCH titles were earned, but only one dog will forever be in the record books for having earned the first one. Can you name this dog’s breed without Googling it? The answer is below the image credit.

“Obedience Training” a limited edition giclee print of an original illustration by Stephanie Birdsong
This print is available for purchase here. 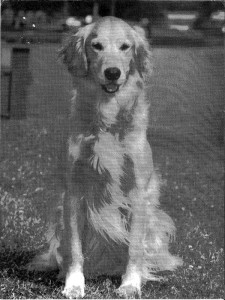 Tonka was the top-winning Obedience dog in the country that year. She reached the apogee of an exceptional career by being the first dog to achieve an OTCH. On the way to her championship, she had two perfect scores of 200 and nine High in Trials. Goosebumps, right?

As the #AKC reported: “Tonka was born June 2, 1972. Starting in 1973, Klipple and Tonka became a regular feature of the obedience rings. Her first year out she was Highest Scoring Dog in the regular classes six times. In 1974, campaigned in Open and Utility, she had 91 class firsts, nine seconds, four thirds, and one fourth place, and was High in Trial a total of 34 times. In 1975, Tonka won her class 109 times and came in second 12 times, and third twice for a total of 41 High in Trial awards. In 1976, she was High in Trial 37 times. In 1977, she repeated this distinction 16 times until she achieved her Championship in July. She was shown selectively in the future after a much deserved rest.”

The Frenchie and the Titanic ...

The Frenchie and the Titanic

This irresistible breed was first bred in Nottingham in 1800s by lace makers who wanted to create a small, miniature version of English Bulldog; at first, some called these dogs, “Toy Bulldogs.” In the 1860s, the craftsmen, now casualties of the Industrial Revolution, moved to France, and settle...

They were born of a human enchanted into the form of the Irish Wolfhound.... ...

Irish Wolfhound: “Gentle when stroked; fierce when provoked:” Old Irish proverb. In medieval Ireland, there were bands of landless and lawless young people known as “kerns.” Some were young aristocrats who hadn’t yet come into their inheritance of land, and mostly they were young men, but ...