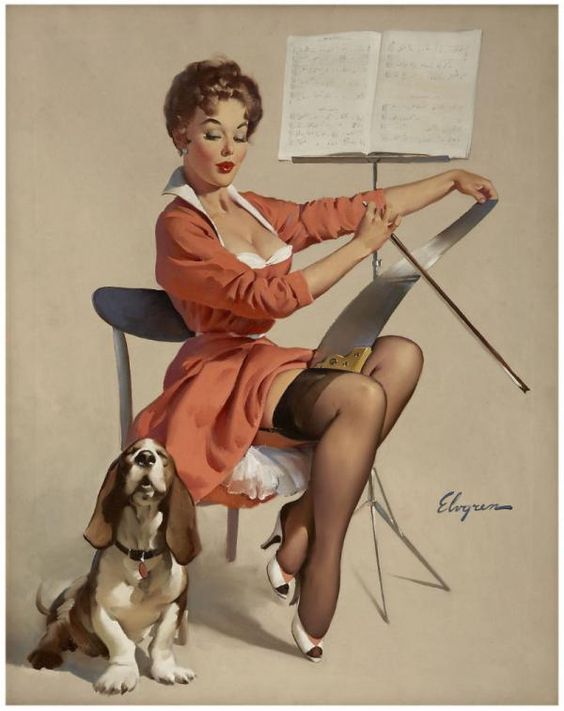 Most of us are familiar with “pin ups,”  or more commonly, pin up girls; these mass-produced pictures intended for informal display (they were usually torn out of a magazine and “pinned-up” on a wall) typically depicted a glamorous model, but just as often, the subject was a scantily clothed young lady.  Over time, many have come to see the artistry in original pin up art, something that was regarded as “cheesy” by its contemporaries.  There have been many fine pin up artists over the years (Alberto Vargas comes immediately to mind), and in 2014, the Huffington Post published a history of pin-up art which you can see here. We want to focus, however, on one pin up artist who often included purebred dogs in his work: Gil Elvgren.

As pin ups go, our example of Elvgren’s work seen here is pretty tame, but if you do a Google image search on “Gil Elvgren pin up” girls with dogs,” you’ll see that he wasn’t always a boy scout (if you catch our drift, winkie winkie). Still, from a Great Dane and Fox Terrier to a Scottie or Basset Hound, Elvgren liked his dogs.

Elvgren died in 1980, but from the mid 1930’s through 1972, he produced over five hundred oil paintings of beautiful women, and some of his models are names you would know if you’re of a certain age: Kim Novak, Barbara Hale and Arlene Dahl, among them.

Many of his pin-ups were reproduced as nose art on military aircraft during World War II, and in 1944, Elvgren was approached by Brown and Bigelow, a company still known for its calendars. Unlike many artists of the day, Elvgren was a commercial success. You can read more about Elvgren and see his work here.