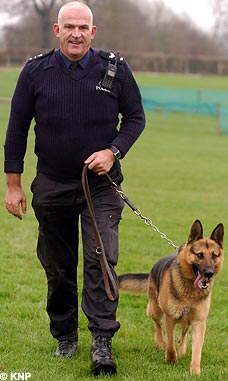 So you’re a bad guy hiding from the law when you find yourself looking at a dog chomping down on your calf. Sure, it really hurts. But worse, the command you hear given to the dog isn’t want you want to hear. It’s not that the command isn’t, “Stop chewing now!” It’s that the command isn’t in English, and for all you know, the words being said are, “Would you like ketchup with that?”

We make light of a shrinking world made possible by the Internet. Not only are many of us importing our dogs from foreign lands, but many of our dogs, and the dogs recruited by law enforcement are dogs for whom English is not their first language. Some dogs that are being imported come already trained, but in a language that’s not English. In 2008, for example, a shortage of highly-trained dogs in Britain forced police forces to acquire German Shepherd Dogs from Germany (they could have used this website of German dog commands).  Many other “pre-trained dogs” come from Slovakia, Hungary and Poland, and it’s up to the new handler to learn the commands familiar to their new K-9 partner. In time, switching languages is relatively easy, and the dogs become bilingual very quickly as they associate an old command with a new one.

The upside of sticking to the dog’s original tongue, however, it that it’s harder for criminals to replicate the commands they would use to confuse the dog. Ultimately, language takes a back seat to the bond formed between handler and dog, but early on, the language barrier can be challenging.

Do you have a bi-lingual dog?

Here’s an article you may want to read.