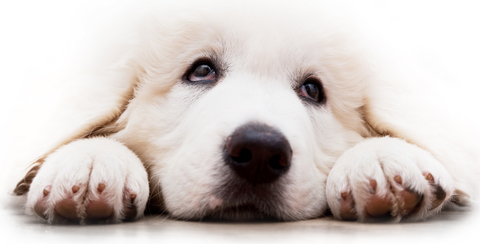 Many of the breeds we admire – the Pyrenean Mountain Dog, the Maremma, and the Slovensky Cuvac, to name a few, have a common relative in another terrific LGD (Livestock Guardian Dog), and that is the Tatra Shepherd.

More than a single purpose working dog, Tatras have been all-around “handymen dogs” for hundreds of years to the mountain people of South Poland, and specifically, the Podhale, Poland’s southernmost region sometimes referred to as the “Polish highlands. It’s thought that ancestors of the today’s Tatra accompanied nomads who settled in the vicinity of the Tatra mountains to graze their large herds. Also known as the Polski Owczarek Podhalanski, the name translated into English is “Polish shepherd from Podhale mountains.“

It was mountaineering in the mid 1800s that gave the breed more exposure, and shepherds pointed out how useful it was to hang on to the dog’s plumed tail when traversing rough terrain. Controlled breeding began around 1920 by Polski Związek Hodowców Psów Rasowych (the Polish Association of Pedigree Dog Breeders) and Towarzystwo Miłośników Psa Służbowego (the Society of Working Dog Breeders), but WWII put an end to the breeding programs; the number of dogs starving skyrocketed. Had it not been for the dogs that survived because they lived in more isolated areas, there might have been none for an American Foreign Service Officer stationed in Poland to see – and fall in love with – in the 1980s. He shipped three of the dogs back to the United States, and it’s believed that it was those dogs that started the American population of Tatras.

The timing was fortuitous. They arrived just after martial law was declared in Poland.