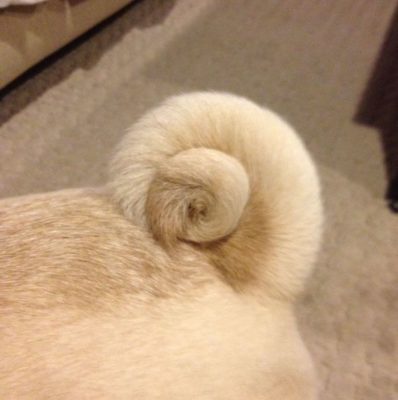 There’s something interesting about this Pug’s back end, can you spot it?

It’s not that the Pug’s bottom is cuter than a bug’s ear (an expression coined by someone who clearly never encountered a hairy bug the size of a hub cap). The picture is showing us something else, can you spot it?

We’re all accustomed to the delightful curl of a Pug’s tail. As in many breeds, the tail can serve as a barometer to the Pug’s mood. Usually curled up, the tail sometimes unfurls, a sign that the dog might be tired, dissatisfied with things around her, stressed, really relaxed, unwell, or (some owners swear), when the dog is guilty of something. Sometimes, an elderly Pug can have a looser tail. Sometimes, a droopy tail accompanied by a decrease in appetite can be a sign of “limp tail,” something that happens when there’s been an injury in the Pug’s tailbone. The short of it is that when a Pug whose tail is normally curled starts carrying it straight and uncurled, it means something.

Interestingly, Pug puppies are not always born having curly tails, and they tend to get that characteristic curl within the first few weeks of life. Sometimes, however, a Pug will have a tail that isn’t curly at all even into adulthood, and this tends to occur when loose-tailed Pugs were bred together. We found one source that said that a non-curly tail can result when the breeder was too focused on creating a double curl regarded as “perfection” in the Pug’s AKC breed standard.

And that leads us to the photograph seen here. This Pug has the highly desired double curled tail, something that only 25% of all registered Pugs with the AKC, CKC and KC have.

Double curled tails tend to exhibit two swift curls; one curl that is large and loose, and merges into a second, tighter curl. It’s said that some Pugs with a double curl have tails that even make two complete circles of the same radius! We couldn’t find a picture of such a Pug and you have one, show us!