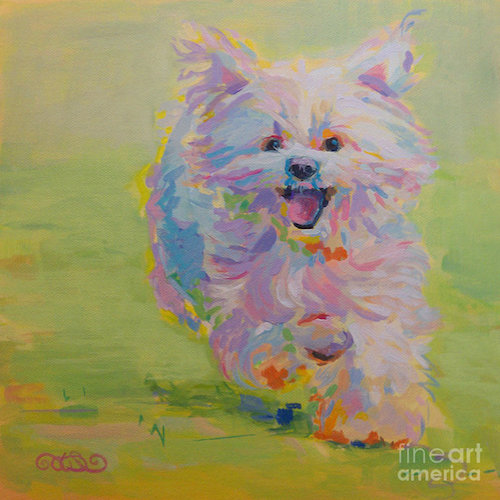 We suppose that having many different names could be viewed as a testament to the popularity of a dog: As a breed spreads around the world, different cultures bestow their own name on the dog. It would be a long time before the Melitaie dog, Roman Ladies’ dog, Shock Dog, Spaniel Gentle and Ye Ancient Dogge of Malta would be universally known as the Maltese. It took a while because the breed originating in Malta goes back at least as far as 3500 B.C., and in some circles, it’s thought to be most ancient of all European toy breeds.

“Issa” may have been the first breed rock star. Owned by Malta’s Roman governor, Publius, in the first century, Issa was made famous with the poet, Martial, wrote a poem about her. We knew you’d want to read it, so here you go:

For everyone who didn’t go to parochial high school school and learned Latin, a translation:

Issa is more mischievous than Catullus’ sparrow:
Issa is purer than the kiss of a dove;
Issa is more flattering than all girls;
Issa is more dear than India’s gems;
Issa is Publius’ darling little dog.

You will think that this dog is speaking if she whimpers.
She feels sadness and joyfulness.

We may not view it as great literature (that sparrow of Catullus’ must have been some bird),  but how many of today’s breeds can claim having been waxed poetic in the first century?