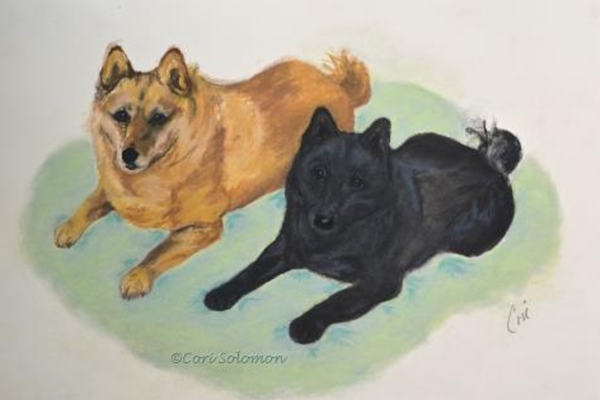 The image seen here is a good way to bring up a a color factoid about the Schipperke. Other colors besides black do exist in the Schipperke’s gene pool, and non-black Schips aren’t necessarily cross bred. Our reading tells us that back in 1888, the first Belgian meeting to approve a Schipperke standard considered a proposal to include colored Schipperkes, but it was voted down.

As for the science (what we call “wading into the tall grass): Two pair of genes control color in the Schipperke, the “B” gene that produces black coat, the “E” gene that permits dark color to be formed in the coat. Each Schipperke has two of each, and therefore in most Schips, the coat color location in the chromosome can be identified as “BBEE” with one of each letter coming from each parent.

VetGen research about the locus of the gene, and the variant that produces non-black coats was only recently added to literature. Variations in the “B” locus usually are shown as “b” an alternative and recessive gene which results in colors like brown or chocolate, maybe even blue). Variations in the “E” locus are shown as “e” an alternative and hidden gene which prevents dark pigment from forming in the hair. Both of the genes in this locus must be “e” to result in the fawn or blond Schip.

All that said, the AKC, FCI, and Canadian Kennel Club Schipperke standards call for an all black Schipperke. As far as we can tell, only the United Kennel Club and England’s Kennel Club permit other whole colors besides black:

From the UKC’s standard: “The Schipperke is a solid black dog. Other solid colors (shades of cream, ivory, wheaten, gold, red, white, blue, and chocolate) do occur and are permissible. However, bi-colored dogs such as black and tan, or dilute colors such as blue-cream, are not solid colors and are eliminating faults.”

From The Kennel Club: “Usually black but other whole colours permissible.”