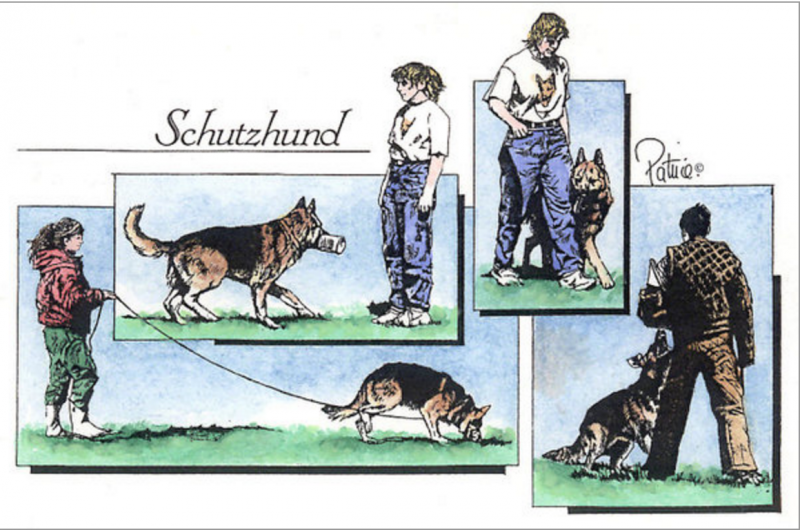 Perhaps someone proudly mentioned that their dog was a “Schutzhund (fill in the breed),” or you saw the word written down. Either way, you weren’t sure what it meant, only that you were left with the impression that it was important and pretty cool.

There’s no mystery to Schutzhund. It’s German for “protection dog,” (though some Germans call it, “hundesport”) and it typically refers to a sport, or one of several training programs, that test both handler and dog in three arenas: Tracking, obedience, and protection.

In the most simplistic of explanations, tracking requires the dog to track footsteps over a variety of terrain, be able to change direction, and show accuracy and dedication to finding the track. One source described it as the most peaceful part of Schutzhund. In obedience, heeling on and off lead is tested, along with the sit, down and stand exercises. The handler and dog team work in a larger field than an obedience trial at an AKC show, and some exercises require the dog to work despite loud sounds, such as a firing gun. The protection aspect of Schutzhund is the one most widely misunderstood, but if spectators remember that the most important part of this exercise is the relationship between dog and handler, the rest is more easily understood. Unless either the dog or the handler is attacked, a dog must never bite the trial helper, and s/he must stop biting on the handler’s command. Needless to say, it’s more involved than that, but that’s the essence of it.

Frequently, people confuse Schutzhund protection training with police dog or personal protection work, perhaps because the Royal Dutch Police Dog sport and Schutzhund began around the same time in the early 1900s. It was employed as a test for working German Shepherd Dogs needed for police work, border patrol, customs, military and herding, and helped determine which dog could be used for breeding, and which dog had true working ability. As these tests evolved, more people got involved for the fun of it, and to see if their own dogs  could be trained as effectively as “professional dogs.” These days, tens of thousands of people participate in the sport each year, but it’s not easy. As tough as the tests we described above are, they’re all given on the same day making it even more demanding.

In looking for one governing body for Schutzhund, we found a plethora of them.  The following comes from Wikipedia, so evaluate the information as you will:

Schutzhund is governed by a number of organizations. The FCI, the international umbrella organization for all things dog related, sets the rules for IPO titles. (IPO is the FCI name for sport Schutzhund titles.) The AZG sets the rules for Schutzhund for all breeds. The AZG is one of the component organizations of the VDH, the all breed kennel club of Germany. The German Shepherd Dog Club of Germany, the SV, is a member of the VDH and arguably the most powerful influence on the sport. Although the AZG formally sets the rules, the AZG does nothing with respect to Schutzhund without the approval of the SV. Still, the SV has great influence in the FCI and is probably still the most powerful influence on the sport. The DVG is an all-breed dog sport organization in Germany that organizes clubs and trials and has branches in Canada and The United States.

The largest Schutzhund organization in the US is the United Schutzhund Clubs of America, called USCA. In spite of its name, USCA is a German Shepherd Dog breed club. The Working Dog Association is a branch of another GSD breed club, the German Shepherd Dog Club of America, which also sponsors clubs and trials. There are a small number of DVG clubs in the United States, various other breed organizations that are involved in Schutzhund, and the American Working Dog Federation (AWDF), which is an umbrella organization. There are other breed specific Schutzhund clubs such as the United Doberman Club. In the case of the Doberman the AKC will not allow you to add Schutzhund titles to your dog’s pedigree unless they are earned with the United Doberman Club. This barely scratches the surface.

If you’re involved in Schutzhund, we’d love to hear from you, and welcome your input in “rounding out” the information above.