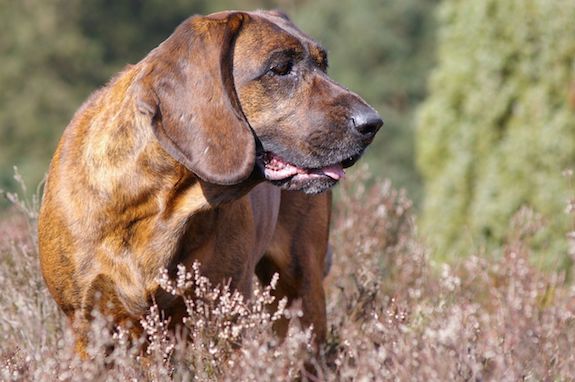 When we hear the word,  “Bloodhound” (capital B),  we commonly think of the breed, but a blood hound (small b) is also a generic term for a dog that follows a blood trail. Though some might think it’s an oxymoron to put “hunting” and “conservation” in the same sentence, hunters actually play a large part in conservation efforts across the U.S. through taxes, licenses and donations, and blood trail dogs are part of resource conservation through the ethical recovery of big game.

Many people who prefer to know the source of their meat hunt only what they’ll eat, and it is an anathema to a principled hunter if game wounded by his or her hand travels for miles only to hide in heavy cover and die a long, slow death.

Development of blood trailing dogs were common on the European continent. In Germany, for example, an honor code among hunters demands an obligation to find all shot game, dead, or alive and wounded. Since a shot deer may leave only droplets of blood yards apart, only a blood tracking dog can follow the trail of a wounded animal, especially a trail that is old (referred to as a “cold” trail). It may take days to find the animal, but in Germany, the search is never abandoned until the animal is found.

Schweisshund quite literally means “bloodhound,” and there are many breeds that can act in this capacity. The largest and heaviest of the German Schweisshunden is the Hanoverian Hound, a specialist at bloodtrailing.  Developed in the 19th century in Hanover in Upper Saxony, the breed initially got its start with heavy hounds like the Solling-Leitbracke crossed with lighter type Celtic hounds with long ears and narrow head (also known as Bracken). Though once used in packs, nowadays these dogs typically work solo, and they are extremely valued by game wardens and forestry agents. These are the dogs that are brought in when other dogs fail to find wounded game. One account tells of a Hanoverian Hound that found game thirty miles away following a trail that was over a week old.

In the United States, there are organizations such as United Blood Trackers that help promote resource conservation through the use of trained tracking dogs. Members can find a tracker dog by state, and among the breeds listed on their website are the Dachshund, Blue Lacy, Bavarian Mountain Bloodhound, Deutsch Drahthaar, Beagle, Jagdterrier, and Slovakian Hound. Use of the bloodtrailers also varies by state and you can read more about that here.