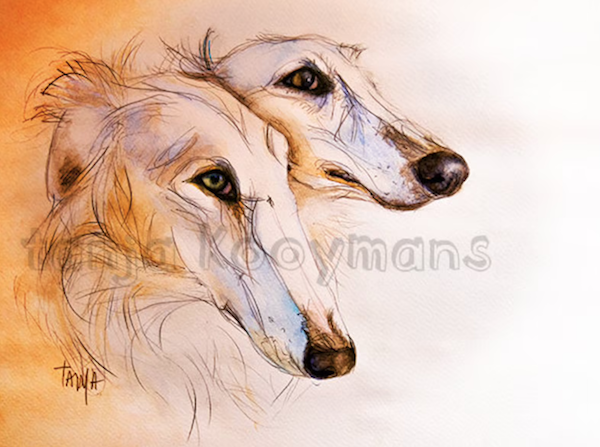 Few dogs exemplify elegance the way a Borzoi does, and few breeds can claim as dramatic a history. At one time before the Russian Revolution, there were seven big Borzoi kennels in Russia, six of which were snuffed out – dogs and all – during the first years of USSR when the dogs were killed because of their association with nobility and the Czars. These old kennels were Perchino, Ozeroff, Boldaroff, Tscebischoff, Sumarokoff, Gejeroff and Bibikoff.

Back in the day, Russian estates were miles and miles apart, and every estate’s kennel was like an island in an ocean. Consequently, the vastness of Russia contributed to “varieties of type” in the breed. Today, the Borzoi standard (AKC) allows eighteen colors and nine markings, but old Russian kennels before the revolution bred their dogs, in part, for a specific color so they could be spotted and identified from a distance. Extravagant hunting parties often included well over 100 dogs which generally worked in teams; they could attack a wolf from two different sides and pin them to the ground until the hunter arrived to either finish the kill or set the animal free. Knowing that a particular colored dog belonged to a particular estate was helpful. That all stopped with the Russian Revolution which ended the era of the noble hunt, and began the Borzoi killing en masse.

Years later in the late 1940s, a Soviet soldier named Constantin Esmont made detailed records of the various types of any Borzoi he found left in Cossack villages. At the National Hunting Committee, he lobbied for a decree to forbid hunters from using dogs that had no pedigree papers. This forced local hunters to keep purebred dogs. He also persuaded the Russian government that Borzoi were a vital breed, and thus began a government-regulated breeding program to save the breed.