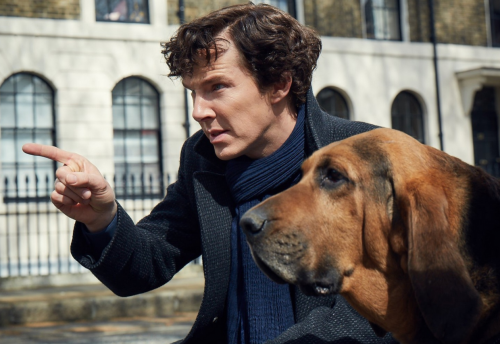 We try really hard not to have tunnel vision, but as we see it, if you’re not a Sherlock Holmes fan, check  your pulse. We had thought that the consummate Sherlock Holmes was portrayed by Jeremy Brett (and who knows what part he played in the classic, My Fair Lady?) but Benedict Cumberbatch’s interpretation gives us pause. It’s like trying to decide who your favorite James Bond actor is. We were always die hard Sean Connery fans, but – sigh – Daniel Craig……………

Purebred dogs figured into a couple of Sherlock Holmes stories. Though “Toby” was described by John Watson as a “ugly long haired, lop-eared creature, half spaniel and half lurcher, brown and white in colour, with a very clumsy waddling gait,” he was portrayed as a purebred dog in a few movie or TV portrayals. “Carlo,” from “The Adventure of the Copper Beeches,” was a Mastiff, and the supernatural hound of the Baskervilles was often portrayed as a Wolfhound.  And more recently, Sherlock’s flashbacks to childhood (via Benedict Cumberbatch) swirl around the memory of “Redbeard,” the family Irish Setter.

Holmes, himself, was variously described as a “blooded, well-trained foxhound,’ a ‘sleuth-hound,” and in ‘The Priory School’, Holmes himself even hopes that ‘two old hounds like Watson and myself’ might ‘sniff’ out the scent of the crime together.” 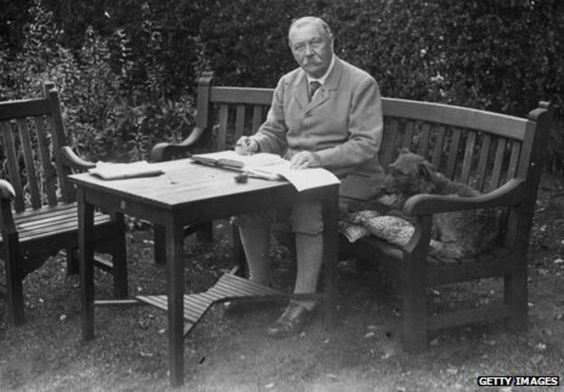 All that said, Arthur Conan Doyle was a terrier man, owner to “Paddy” (seen above) who’s been described as an Irish Terrier and an Airedale. We came across a video of the pair which you can see here. What say you as to Paddy’s breed?